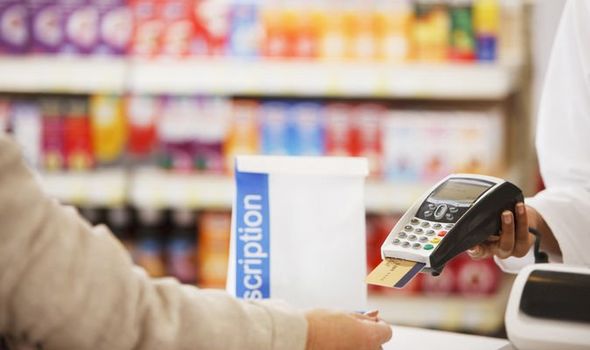 Campaigners described the proposals as a “kick in the teeth” for the sick and the NHS. They warn that 2.4 million people aged 60-65 will have to start paying for their medicines.

Those on low incomes just above the benefits line are likely to be worst hit, with thousands forced to ration their medication because they cannot afford the extra cost.

Currently people qualify for free prescriptions ‑ which cost £9.35 per medicine ‑ at 60. But the Government has launched a consultation on raising the age to 66 to tie in with the state pension age.

Jan Shortt, National Pensioners Convention general secretary, said: “This will have a massive negative effect on the health of pensioners who lose their free prescriptions.

“Prescription charges are not affordable if you are on low income without financial help of some kind.

“For many, abilify seroquel lithium it could mean not being able to buy their prescribed medication with all the consequences that will follow without the support of that medication.

“What is it older people have done to deserve these attacks on our income and wellbeing?

“First the TV licence for over-75s, the age-old rhetoric about the triple lock, now prescriptions.

“After a lifetime of work, we just want to live a dignified retirement, but it seems that is something those in power fail to understand and respect.”

Age UK has launched a Save Free Prescriptions campaign in response to the new consultation that was pushed out by the Government last month and closes in just over two weeks’ time.

The charity points out that prescriptions are free for everyone in Scotland and Wales.

Caroline Abrahams, Age UK’s charity director, said: “This proposed policy is a kick in the teeth, both for poorly older people and the NHS.

“It is also extremely ill-judged, because the money the Government will save by scrapping free prescriptions for 60-65 years olds will almost certainly be outweighed by the additional costs to the NHS if people fail to take their medication because they can’t afford it and become ill.

“If someone in this age group decides their best option is to buy a Prescription Prepayment Certificate [a one-off annual fee for all personal prescriptions] every year it would cost them more than £600 in their run up to retirement, so from that point of view this really is a stealth tax on older people.”

Ms Abrahams added: “Essentially, we think this is a terrible proposal that deserves never to see the light of day. We hope that thousands of people will respond to the Government’s consultation and tell them so in no uncertain terms. Ministers definitely need to think again.”

According to the Government’s impact assessment, 95 percent of people aged 60-65 use at least one prescription a year, which is equivalent to 3.6 million people.

Health ministers have said that people could buy a prepayment certificate to cut their costs, at £108.10 a year. But the PPC requires either upfront payment or setting up a direct debit, something that many older people may not be able to afford.

Laura Cockram of Parkinson’s UK, who also chairs the Prescription Charges Coalition, said: “The impact when people struggle to afford essential medication can be massive.

“For people with long-term health conditions like Parkinson’s, asthma and MS, affording the everrising prescription charge ‑ often for multiple medications ‑ is a burden.

“Increasing the length of time that they have to continue to make this tough choice, as their health declines, will place further pressure on our stretched NHS.”

‘I would have to give up taking vital medicine’

Kimberley Hogben suffers from depression and anxiety, conditions treated with one prescription medicine, which she buys every month for £9.35 ‑ a total of £112 a year.

Kimberley, 59, is currently unable to work because of her health and she’s fearful of further potential medical problems as she ages, which could push the price of medicines out of her budget.

And if the Government goes ahead with proposals to raise the qualification age for free prescriptions to 66, she faces paying for medicines out of her pension.

Kimberley said: “My main concern is that if I am forced into paying for medication in the future, and I need additional medicine as I get older, it could cost well over £200 a year.

“It concerns me that I won’t be able to spare the money to spend on medicines. I may be forced to choose between taking medicine, buying food or heating my home.

“If it came down to it then I would have to give up taking the medicine ‑ I simply wouldn’t have a choice.”

Prescription charges in England should be abolished. They hit the poorest hardest and create extra bureaucracy for pharmacists who would rather focus on helping patients.

So it is really hard to understand why the Government not only wants to keep forcing patients in England to pay prescription charges (they are already free in Wales and Scotland), but is planning to start making older people pay more.

Anyone over 60 in England does not currently have to pay for prescriptions. However, the Government plans to raise this age to 66.

People aged between 60 and 65 are often prescribed medicines for long-term conditions which they will take for many years.

Introducing prescription charges for them now, just as times are tight, could put more people off taking their medicines than we already see.

And its own impact assessment states that the policy would affect some lower income groups more severely. People should not have to make choices about their health based on their ability to pay.

Every day pharmacists are asked by patients who are unable to afford all the items on their prescription, which ones they could and couldn’t do without.

They should not have to ration their medicines.

No one should be faced with a financial barrier to getting the medicines and care that they need.

It’s unacceptable to raise the cost of prescriptions in the current economic situation, when many have been disadvantaged by the pandemic.

We need a review of the current system to ensure that it supports people facing long-term and increasing medication costs.

Better yet, prescription charges should be abolished altogether.

Pharmacists don’t want to be the prescription police. We want to help look after patients.

The pandemic has shown how important it is to make patient care the number one priority.

Prescription charges are one piece of red tape that the Government should cut.

Thorrun Govind is chair of the Royal Pharmaceutical Society