US Treasury Secretary Janet Yellen and a top White House adviser called for major reforms at the World Bank on Thursday, saying the seven-decade-old multilateral development bank was not built to address multiple and overlapping global crises.

Yellen told reporters that both the World Bank and the International Monetary Fund were not designed to handle the multiple global crises they now face, including fallout from Russia’s war in Ukraine and the COVID-19 pandemic, and they lack the resources to tackle climate change. 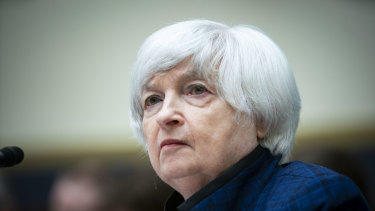 Yellen said the IMF, which has about $US1 trillion ($1.35 trillion) in total lending resources, was intended to help individual countries deal with isolated crises, while the World Bank was created to finance development projects in countries that lacked access to capital markets.

“We face challenges that will now require investment on a scale that an international institution can’t manage on its own, like climate change,” Yellen said. “The investments for climate change will add up to just trillions and trillions of dollars.”

She said she could not say what reforms are needed to scale up the institutions, but she added that they needed to be able to harness large pools of private capital.

The World Bank’s lending totalled $US99 billion in fiscal 2021.

The institutions also need to be better capable of delivering “public goods” such as improved public health infrastructure to handle future pandemics, which may require alterations to the World Bank’s mandate.

In separate remarks, Deputy National Security Adviser Daleep Singh said he was in “full throated agreement” with Yellen, and believed the bank’s business model – which puts a premium on maintaining a AAA credit rating – was not well-suited to catalysing global change.

“It’s really past time to reimagine, and reboot the mission and the business model of the World Bank,” Singh told an event hosted by the Bretton Woods Committee.

The comments come amid growing calls by civil society groups, developing countries and academics for a new “Bretton Woods,” a reference to the conference held in 1941 that led to the creation of the IMF and the World Bank.

“I think the bank has made a fetish out of its triple-A rating over the course of many years,” Singh said, citing studies that showed a small downgrade in the bank’s credit rating could triple its lending capacity or more.

Shifting its stance would allow the bank to more risk appetite and become more of a “first mover” in terms of investments in the developing world, Singh said.

The bank could take on “first loss positions” that could potentially motivate private sector investors to come in and expand the pool of resources available for climate finance or health security into the trillions of dollars needed.

“That’s what’s going to be needed to hit the Paris goals when it comes to climate, both on emissions reduction and adaptation,” Singh said.

He said the World Bank also needed to “get a lot louder” about the need for debt restructuring for low-income countries, given that 60 per cent are in or near debt distress.

“We’re going to need China in particular, but also the private sector, to step up and take burden sharing seriously through the common framework,” he said, referring to the G20 framework agreed with the Paris Club of official creditors.