I was a cub economics reporter in 2007 when the news broke that China had overtaken Japan as Australia’s biggest two-way trading partner. It didn’t seem like much at the time. Turns out it was a pretty big deal. 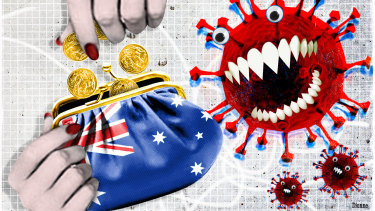 Indeed, the rise of China has turned out to be the single biggest driver of the Australian economy and Australian living standards in the 13 years since.

As a nation, we’ve surfed the rising tide of China’s voracious appetite for progress, and grown rich supplying the iron ore and coal needed to fuel its furnaces. China has been our biggest opportunity. Now it poses our biggest risk.

When the SARS virus broke out in 2003, Japan was still top of the Aussie export charts.
Today it is a very different story.

Today China is responsible for buying a whopping third of all Aussie exports – and Japan just over 10 per cent. Our biggest exports are, of course, bulk commodities such as iron ore and coking coal, but also service exports such as tourism and education (which they have to come here to get).

China is also the single biggest buyer of Australian alcoholic beverages, including wine, and some food products, including milk products which are exported both directly and indirectly through the informal “daigou” or mail-order market.

But our trade links and exposure to China run even deeper than exports. Australians source a fifth of our total imports from China, second only to the European Union as our biggest import source.

Some of these imports come direct to consumers, while others are inputs to what remains of the Australian manufacturing industry, which will also be squeezed as the coronavirus crisis wears on.

Much now depends on how quickly China can get back to work. But our policymakers have concluded that the outbreak of the coronavirus in China – and the subsequent global lockdown – will bite an even bigger chunk out of Australia’s economic activity than the summer’s devastating bushfires.

For all their enormous personal toll, the bushfires affected only a small area of Australia’s economic activity. The Reserve Bank calculates the devastation will knock 0.2 per cent off economic output across the December and March quarters. But that negative effect is expected to be entirely offset by a positive impact as homes and businesses are rebuilt. By the end of the year, the net impact will be close to zero.

The economic risk posed by coronavirus is of an entirely different magnitude, and one that any sensible person must confess is too early to quantify. Clearly, however, it's bad news for economic output, jobs growth and the return of the federal budget to a much-desired surplus.

Interestingly, the Reserve Bank did modelling last year on the impact on the Australian economy from any slowing in China’s growth. The paper, Spillovers to Australia from the Chinese Economy, ran a range of scenarios, including a bursting of the Chinese property bubble, but failed to predict, and therefore model, the outbreak of a rapidly spreading disease. And who can blame them?

Nonetheless, their results are telling. Overall, the Reserve Bank staff found that a slowdown in Chinese economic activity of about 5 per cent could result in a decline in Australian output of up to 2.5 per cent.

“Trade linkages and China's influence on global commodity markets are likely to be the key channels through which a slowing in growth in China would spill over to Australia,” they concluded. “A sizeable decline in economic activity in China is likely to decrease Australian economic growth, through lower exports and investment, raising unemployment and putting downward pressure on prices.”

Such negative effects, however, could be offset by “accommodative monetary policy” – meaning interest rate cuts. Such action will no doubt be on the table when the Reserve Bank board meets next Tuesday.

And as for other potential remedies, the authors note: “automatic stabilisers (lower tax and higher government spending) and discretionary fiscal stimulus can also provide an additional shock absorber for the domestic economy”.

“The effects on the Australian economy will ultimately be contingent on whether policy is able to respond in a way that is sufficiently timely and commensurate to the size of the shock.”

There are just over 10 weeks to go before Treasurer Josh Frydenberg must deliver his second federal budget on May 12. Next week, we’ll get national accounts revealing the early impact of the bushfires in the December quarter. We won’t see accounts for the March quarter we’re currently in until June – well after the budget.

Policy wonks will, however, have access to some crucial partial indicators, including service exports, retail sales and jobs, which will provide a glimpse at the true impact of this summer’s unpredictable events.

It’s entirely probable the wonks will decide that unseen “parameter variations” have blown the government’s much-desired surplus off course. In which case, the only sensible course is to let it – rather than to embark on any budget cuts or tax hikes that would further threaten economic activity.

Only time will tell.