What should Warren Buffett do with his billions?

Legendary investor Warren Buffett’s Berkshire Hathaway made a number of changes to its portfolio at the end of 2019, including adjustments to its five largest stakes.

The value of the Omaha, Nebraska-based company’s stock holdings increased by 12.6 percent, or $26 billion, to $231.6 billion in the three months through December, outperforming the S&P 500’s 8.5 percent gain. While Buffett and his team added four new positions to their portfolio, they sold shares in some of their biggest investments.

Berkshire trimmed its most substantial stake, in Apple, by 1 percent to 245 million shares, which were valued at $71.99 billion at the time of publication. 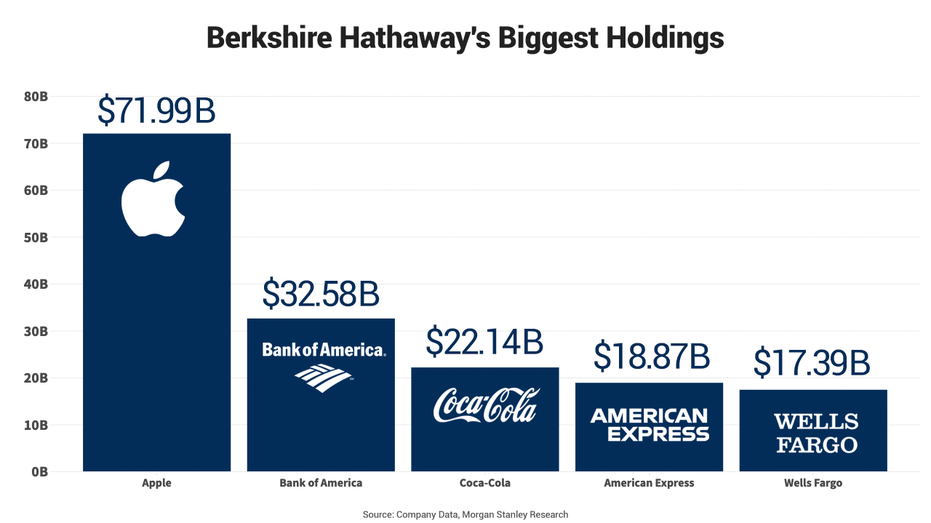 The conglomerate also sold shares in Bank of America and Wells Fargo, its second- and fifth-largest holdings.

At the end of the fourth quarter, Berkshire owned 925 million shares of Charlotte, N.C.-based Bank of America, down 0.2 percent from the prior three months. Its stake in San Francisco-based Wells Fargo was slashed by 15 percent, or 55 million shares, to 323 million shares.

Berkshire’s remaining Bank of America and Wells Fargo holdings were worth $32.6 billion and $17.4 billion, respectively.

Coca-Cola and American Express were Berkshire’s third- and fourth-largest holdings at the end of the fourth quarter, worth a respective $22.14 billion and $18.87 billion.

While Berkshire owns a number of businesses outright, including Burlington Northern railroad, Dairy Queen and aerospace manufacturer Precision Castparts, the conglomerate more often finds value "in publicly-traded businesses, in which we normally acquire a 5% to 10% interest," Buffett wrote in an annual letter to investors in 2019. "In recent years, the sensible course for us to follow has been clear: Many stocks have offered far more for our money than we could obtain by purchasing businesses in their entirety."

It was because of that disparity that Berkshire purchased $43 billion of marketable stocks in 2018 alone.