The Reserve Bank of Australia's payments board is currently considering the issue of "least-cost routing", which allows retailers processing tap-and-go payments to elect to direct these through the Eftpos network rather than global systems like Visa and Mastercard, where higher fees may apply. 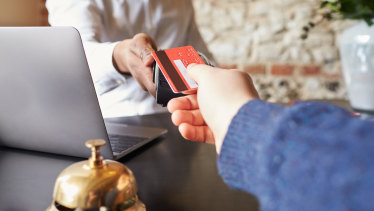 The Reserve Bank of Australia’s Payment Systems Board will be considering whether further regulation is needed to give merchants control over tap-and-go fees. Credit:Shutterstock

Control over how these payments are processed has been a fiery issue for smaller retailers, with sectors from coffee shops to pubs finding they until recently had to process tap-and-go as credit transactions that often cost more.

Banks and providers have started to roll out options to direct these payments through debit rather than credit but Visa has hit out at the suggestion that "merchant choice" options be compulsory.

"A mandate would mean we were divorcing consumers from their set of choices," said Suzan Kereere, head of Visa's global merchants and acquiring arm.

A blanket move to direct payments towards debit networks could have implications for consumers around things like the fraud protections offered, Ms Kereere said.

The warnings clash with the views of smaller retailers, who have long argued the retailer should have ultimate control over how payments are processed.

Council of Small Business of Australia chief executive Peter Strong dismissed Visa's calls for consumer choice. "The consumer has no idea how the process works either, so it's just self-interest," he said of the choice argument.

Ms Kereere rejected this, and also questioned assertions from Australian retailers that the cost of accessing international payments networks like Visa were consistently as much as four times more than domestic debit processing.

However, Visa said it could not detail typical processing costs because they differed so much depending on the retailer and their banking relationship.

In 2019 the big four banks and other providers started rolling out opt-in "merchant choice routing" options which would direct tap payments automatically through debit channels rather than credit.

The adoption of this option has not been widespread, with the banks admitting only around five per cent of their merchant terminals at best have opted in to merchant choice options.

ANZ confirmed 3,500 users had adopted the routing since launch last year, while Westpac had 1,140 users.

All four banks said they were still working on communications to customers, but that the system had to be opt-in because automatically routing all transactions through Eftpos rather than credit was not always the most cost-effective option.

Mr Strong acknowledged this was the case but said businesses struggled in the face of a lack of pricing transparency.

He advocated a "dynamic" routing model, which would automatically calculate for companies the lowest cost processing option and complete this for all businesses.

The RBA Payments Systems Board is not expected to make any further moves on the issue of regulation until at least May, when its next meeting is held.

It could consider options including making least-cost routing opt-out rather than opt-in, or forcing banks and processors to provide clearer information about the exact processing costs of fees.