Home » Markets » These late-payment shenanigans have to end

Imagine in a regular full-time job you had to work two months before being paid and the funds arrived only when the task was fully done and the employer was completely happy with it. You would complain, quit or take further action.

Welcome to the world of small business, where large companies routinely pay suppliers months after submitting their invoice, a practice that can crunch cashflow and kill enterprise. 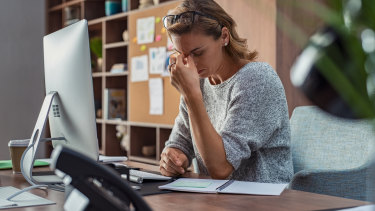 Late payments have too long been an exhausting reality for many business owners. Credit:iStock

I have written about the effect of late payments on small and medium-size enterprises over the past two decades. Small business complains about late payment; the federal government threatens tougher action; and big business says it will pay earlier. Then, nothing happens.

Rio Tinto and Telstra backflipped this month on plans to boost their cashflow at the expense of small suppliers after media pressure. Rio’s strategy involved small suppliers to reducing their invoice in exchange for prompt payment, as part of a "dynamic discounting scheme".

That’s a bit like your employer asking you to take a pay cut if you want to be paid before two months. It is remarkable that corporates can be so stupid to even think about these supplier policies, given the public backlash towards big business.

Thankfully, both businesses have cut their payment terms for most of their smaller suppliers to 20 days. Still, that Rio and Telstra could consider such supplier terms shows how Corporate Australia truly views this issue.

The federal government in November 2018 told our biggest companies they need to pay suppliers within 20 days if they want to do business with the government. Plans to introduce Payment Times Reporting Framework legislation this year will help by requiring businesses with turnover of $100 million or more to report on when they pay small suppliers.

I am not holding my breath for widespread change. It is too easy for large companies to use their power unfairly over small suppliers by delaying or restricting payment, changing their definition of a small supplier or finding other ways to slow payment.

Payment days are only part of the problem. For many small enterprises, unfair policies around invoice submission is as big an issue. Being paid within 20 days is less of an improvement if a business has to wait two months before they can submit their invoice in the first place.

I have worked with publishers that only pay freelancers after their work appears in print. They might, for example, commission a magazine cover story a month ahead of deadline. Then take a few weeks to process and publish it. On occasion, they might move the story to a later issue because of insufficient advertising, or editorial changes.

It is no stretch to say work done in say, February, might not be paid for until May, meaning the business waits four months for payment from the time work began. Inevitably, freelancers accept such terms in the gig economy and view the invoice as hopefully cash in the bank for later.

Not all businesses treat gig economy workers this way. Some I have worked with pay quickly and even before the work is done. Others know that quick payment builds goodwill and attracts and retains top suppliers. Some of the latest to pay are other small businesses, in my experience.

The issue of when invoices can be submitted is a grey concept for small business. I recall working on a large project that was to be paid when the work was complete and the client happy with it. I met the deadline and the client initially liked the work. But it had to be reviewed by a few other department chiefs; one was away and another was busy elsewhere.

The invoice could not be submitted because the work had not been formally approved, partly because of the unnecessarily long review process by too many people. Thank goodness I was not relying on payment to feed my family, or pay staff or a bank loan.

Milestone payments – where small suppliers are paid partly when project milestones are met – are an obvious solution. Tech companies use these all the time, as do tradies on larger projects. I paid four milestone payments recently on a renovation.

That’s not easy for all small businesses, particularly those in creative industries where outputs during a project are not always obvious. Some large companies simply will not accept milestone payments with small suppliers; you are only paid when the work is fully done.

Nobody should have to work months without being paid. No large company should exploit its market power to boost its cashflow at the expense of small suppliers. And no client should hide between convoluted approval processes that are designed to extend payment terms. Yet that happens every day in Australian business.

The best solution is the market. Let us hope institutional investors, such as industry superannuation funds, latch on to reported data on supplier payment terms when it appears and consider it as part of their environmental, social and governance (ESG) analysis.

And that companies that continue to lag on payment terms – at the expense of small business – are named and shamed. It is too big an issue for small business, the community and the economy to let drift, as companies treat suppliers like a bank account.