With its soaring glass windows, rustic timber beams and line of hanging plants, Pablo & Rusty’s cafe in the Sydney CBD is a haven of hipness. So it’s not exactly a surprise to learn the cafe is at the front line of a wave of businesses in our capital cities that are going cashless. “We knew going cashless was going to be a risk,” says Chris Tate, operations manager for Pablo & Rusty’s, which transitioned to card-only transactions about 18 months ago after a successful cashless launch at its sister cafe in Brisbane’s CBD in 2016. “There was a little bit of pushback in the first couple of weeks from customers still rocking up with their change, but it has worked out really well.” 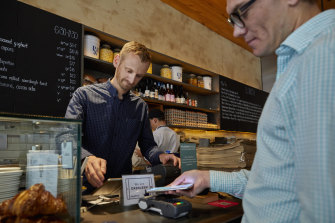 Cafe manager Chris Tate has reaped the benefits of turning his business into a cashless operation.Credit:Jennifer Soo

The benefits of tap-and-go for businesses – speedier service (quicker moving lines), lower risk of theft (less cash on premises) and greater efficiencies (it’s easier to identify the number of transactions per hour and thus staff workflow) – can offset the cost of merchant fees on electronic transactions (credit card companies get a cut every time a card is tapped).

While some business owners complain about the hidden costs of tap-and-go, others like the 36-year-old Tate have embraced it. “Data is becoming an increasing part of running a business, and through our app, for example, we can capture little bits of information, like the types of coffee people are drinking.”

Since their introduction in Australia in 2007, contactless cards have become the preferred payment method, with more than 82 per cent of consumers using their microchip-embedded credit or cash cards at least once a week, according to a Mastercard survey three years ago.

Over the past year, however, there has been a backlash in the US against the rising crop of cashless stores. San Francisco, New York and Philadelphia recently banned shops from rejecting cash, after complaints from seniors and low-income earners who do not possess credit cards.

The move towards a cashless society does seem inevitable, however, especially as digital payments become available to all sections of the population. “Cash is becoming less popular,” notes Tate. “It’s hard to see that reversing.”

To read more from Good Weekend magazine, visit our page at The Sydney Morning Herald, The Age and Brisbane Times.