COVID-19 sealed Peter King’s fate to take the permanent helm at Westpac. Firstly, it removed any chance the board would recruit from outside the bank and secondly, it rendered his extensive experience and understanding of the financials and risk as crucial.

Put simply King is the best-placed person to manage the impending credit event.

For the foreseeable future banks will be operating in near crisis mode. While they are well capitalised many of their customers are now in distress. 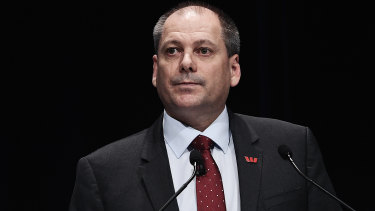 Peter King will manage the bank through an inevitable ‘credit event’.

Although the immediate task for the major banks has been to support struggling business customers with cheap loans and repayment deferrals and offer some retail customers interest-payment holidays, the real challenge will be in dealing with the aftermath – navigating the way through a shell-shocked economy.

This is not a job for a marketing person. It will be back to the basics of managing financial risks, mainly assessing which businesses will survive.

It appears clear that King will be working with a hands-on chairman in John McFarlane, who has worked through several financial shocks.

Looking out of the window from Westpac’s head office at a cruise ship anchored nearby, King said he was reminded that behaviours will change. "Who will be getting on a cruise ship soon?" he quipped.

King's first job is to deal with the "income shock" associated with businesses either closing or shrinking, and people losing their jobs overnight, he told The Sydney Morning Herald and The Age. The federal government, the Reserve Bank and the big four have coordinated actions to deal with the immediate impacts.

"We have effectively said we will do everything we can to help the economy through the period where the social distancing impacts the economy. We have had about 100,000 consumer customers ask for some type of help in the deferral packages," King said.

"But then we need to be ready for a fast restart for the economy. It's not until that point we will be able to work out what the future looks like. So we are a few months away from knowing what happens but the best thing we can do is to get people focused on a fast restart."

King said it was too early to know how many people will go back to work and how quickly and how many businesses restart and how many don’t.

When the picture is clearer, "then we will know what this looks like from the bank's perspective", he said.

How long King remains at the helm of Westpac will be a decision made after a conversation with McFarlane and the board. "I am 50 and have been at Westpac for 25 years, I want the bank to do well and I think I can add real value in the next couple of years," he said.

"It can be extended. To me the next period is about getting us through what's in front of us with COVID-19 then we will think about what’s best for the group in terms of leadership."

While King described this as a credit event he said banks spent the past decade building capital buffers and were heading into it well capitalised. "For me this is working the way it should – that was a very non-customer centric comment that was a bank balance sheet comment", he added quickly.

So why is King the right person to run Westpac during this difficult chapter?

"I saw the tail end of the 92-93 recession, I was in a senior role as we went through the GFC, I know the bank, I know the people and I’ve got a good feel for the questions to ask and the things to worry about."