Telstra chief executive Andy Penn says he expects demand for 5G connectivity to outpace earlier mobile technologies and hinted its offerings could be a viable alternative to fixed-line National Broadband Network services for some customers.

"One of the things I think that most of the telecommunications world believes is that we will see faster adoption of 5G than we will see adoption of previous technology, 4G and 3G," Mr Penn said at a media briefing in Melbourne on Thursday. 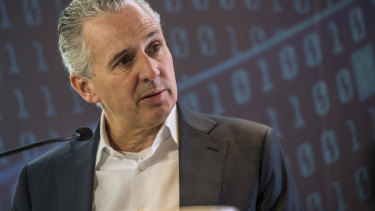 Telstra chief executive Andy Penn said it was important to bring customers into the 5G ecosystem to trial the new high speed technology and refine the offer. Credit:Steven Siewert

Mr Penn confirmed on Thursday morning that the company would be launching a new wifi device this year to deliver 5G coverage via the mmWave spectrum.

The spectrum is considered the next frontier of super fast internet. The Australian Communications and Media Authority (ACMA) is set to auction the 26 gigahertz (GHz) spectrum band, which facilitates mmWave, in 2021, though Telstra has received a scientific licence from ACMA to complete early stage customer trials.

News of the 5G trials came in the same week that the telco confirmed it would no longer be selling NBN plans with speed promises of 100 megabits per second to customers on fibre-to-the-node, fibre-to-the-curb and fibre-to-the-basement connections, instead offering speeds of 50mbps.

"5G is not going to replace the NBN — it’s important all technologies are combined together. At the same time, there will be customers for which 5G is entirely appropriate," he said.

Mr Penn said Telstra was gearing towards an internet-of-things driven world where everything from wheelie bins to traffic lights and cars were connected on a network, a reality that had not yet been truly realised. "The physical world has not yet really been digitised," he said.

How much more these high speeds will end up costing is not yet known, but Telstra would not rule out raising prices.

"I’m not going to comment on pricing going forward, because obviously that is something that is competitive…suffice is to say that we’re very focused on continuing to ensure that we differentiate our pricing for the level of quality of service we are providing — and 5G is a new and different quality of service," Mr Penn said. 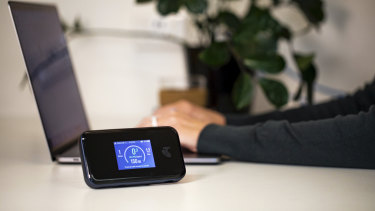 Telstra will be the first telco to trial a wifi modem using the ‘mmwave’ spectrum, which offers even faster speeds than current 5G.

Telstra said it was abandoning the 100mbps tier because it was not possible to know ahead of time whether customers were capable of receiving those speeds, and NBN Co could not advise Telstra of this before a customer signed up for a service

"It’s a painful customer experience — and until we can see if that experience can be improved, that’s the decision we’ve taken," Mr Penn said.

An NBN Co spokesperson said in response to Telstra's decision that it was continuing to work to improve speeds to customers across the network.

"The majority of the nbn Fixed Line (FTTN, FTTB, FFTP, FTTC, HFC) footprint will have access to the 100/20Mbps wholesale speed tier from launch in May 2020," a spokesperson said.

The Australian Competition and Consumer Commission is currently consulting with the telecommunication sector about whether limits should be placed on how much of the 5G spectrum one telco should be able to own.

It's expected that the auctioning of the spectrum will happen in the first quarter of next year.