In the central Chinese city of Zhengzhou, meanwhile, Apple iPhone manufacturer Foxconn announced a big increase in bonuses to stem an exodus of workers rattled by coronavirus curbs at its vast facility there, as China's strict zero-COVID policy exacts a rising toll on the world's No.2 economy.

Unease mounted in China's commercial hub of Shanghai while nationwide the daily local case count hit 2,719, a small figure by global standards but China's highest since Aug 17, prompting other cities such as Guangzhou and Dandong to tighten measures, although Zhengzhou unexpectedly eased its quasi-lockdown.

The Shanghai Disney Resort on Monday abruptly shut its gates, locking in all visitors at the time and only allowing them to leave, hours later, after they had tested negative for the virus.

Several city residents told Reuters they were notified on Tuesday that they or their children could not go to work or school if they had visited Disney since Thursday and were ordered to take daily tests for the next three days.

One said she was informed that her family might have to go into central quarantine.

Marvis He was among Disney visitors caught up in the resort's lockdown, having flown in from Shenzhen in hopes of enjoying the park's Halloween-themed fireworks.

"I feel disappointed, we waited so long in the park … but we didn't get to see anything and only got to get out at 10 p.m.," she told Reuters as she departed the resort.

"We were also cold and hungry," her companion added.

City authorities said the resort was shut after a 31-year-old woman, who had visited the park among other places in recent days, tested positive for the virus.

While much of the world has been opening up, China has vowed to stick to its zero-tolerance approach to COVID-19 with lockdowns and mass testing imposed when even a single case is found, and has shown little sign of laying groundwork to begin easing the policy.

On Tuesday, an unverified note circulating on social media that China was planning a reopening from strict curbs in March triggered a sharp surge in beaten down stocks in Hong Kong and mainland China.

China's foreign ministry said it was unaware of the situation.

"I truly don't know anything about this," spokesman Zhao Lijian said in response to questions at a regular briefing.

Gavekal Dragonomics analyst Ernan Cui wrote in a Tuesday note that China faces the most serious challenge to its containment policy in months, after more than 80% of major cities reported cases last month. 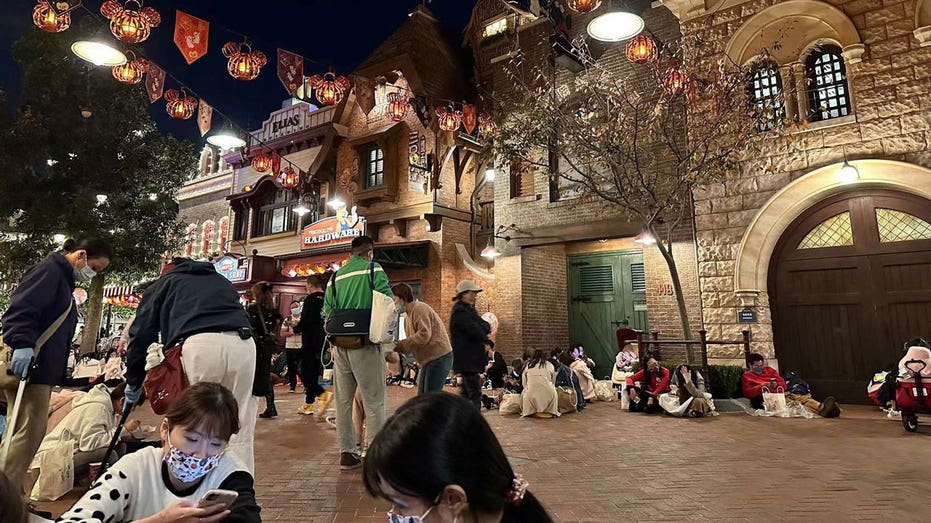 People sit inside the Shanghai Disney Resort after they abruptly shut their gates, locking in all visitors at the time and only allowing them to leave, hours later, after they had tested negative for the virus in Shanghai, China, on Oct. 31, 2022. (Reuters / Reuters Photos)

She said the risk of lockdowns like the one that crippled Shanghai earlier this year is at its highest since May.

"With no clear end in sight to the country's strict containment policy, tighter lockdowns and more supply-side disruptions appear inevitable in the months ahead," she wrote.

Brokerage Nomura estimated there were lockdowns and restrictions in 28 cities last week, affecting almost 208 million people, or 8.5% of China's GDP.

"COVID-zero changes the calculus of doing business within China," said Michael Hart, president of the Beijing-based American Chamber of Commerce in China.

Foxconn has been one of the biggest corporate names affected by a quasi-lockdown of Zhengzhou, a major logistics hub.

The company put the 200,000 workers at its plant in the city under closed-loop management on Oct. 13, triggering complaints from employees about food and their treatment, and prompting many to leave.

In recent days, videos appearing to show departing Foxconn workers laden with luggage and walking along village roads towards their home towns have gone viral on Chinese social media.

Reuters was not able to independently verify the footage but workers have shared similar accounts with Reuters.

A source with direct knowledge of the matter told Reuters on Monday that iPhone production at the plant could slump by as much as 30% next month due to the situation. Foxconn on Tuesday announced it would quadruple daily bonuses for some of the plant's workers to $55 should they continue to work there through November.

Zhengzhou unexpectedly lifted its quasi-lockdown on its nearly 13 million people, even as new locally transmitted cases more than doubled on Monday from the day before.

"For over 10 days, we have persevered and fought together … finally we are ushering in a large-scale restoration of normal life and production in Zhengzhou," the city's counter-epidemic task force told residents.

The outbreak in Zhengzhou, the capital of Henan province, flared up after the Oct. 1-7 National Day holidays, prompting local authorities to start imposing the lockdown of various districts.