Home » Markets » ‘Reduce bottlenecks’: Macquarie boss wants to up the ante on renewables

Macquarie chief executive Shemara Wikramanayake has called on governments to quadruple renewable energy production by 2030 and warns the economic and human cost of climate change is being felt a decade earlier than feared. 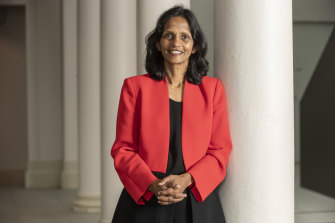 She called on governments to “reduce bottlenecks” to encourage new renewable energy projects, with clean energy increasingly more competitive than as fossil fuels.

“The good news is that renewables are now the cheapest form of new generation in almost every part of the world, and investor interest far outstrips project supply. So, the economics are on our side,” Ms Wikramanayake said. “The pace of renewables deployment needs to accelerate from around 250 gigawatts a year today, to more than 1 terawatt by 2030.”

Without mentioning Australia directly, Ms Wikramanayake said governments that set clear net zero emissions targets and decarbonisation plans can direct “huge pools of capital” towards wind and solar projects. “All governments must now prioritise renewables in their energy generation mix and respond to a world that is long on capital and short on projects.”

The federal government has avoided setting a net zero emissions target ahead of the COP26 next month, the United Nations Climate Conference, despite mounting global pressure amid renewed Coalition infighting and pushback from the Nationals over climate action.

“We sadly don’t need to look far for the tragic human and economic costs of our changing weather – all happening a decade earlier than previously feared,” she said.

“The role of the land in our global net zero ambition is hard to overstate, encompassing issues around water, pollination, food production, waste management and of course carbon removal. This relationship demands careful thought as to how we balance our needs against maintaining natural systems and biodiversity.”

Macquarie’s green credentials came under question this year over its extensive investments in the oil and gas sector. Ms Wikramanayake said it was essential the investment community remained in heavy emitting industries to encourage clean transitions and ensure jobs are protected. 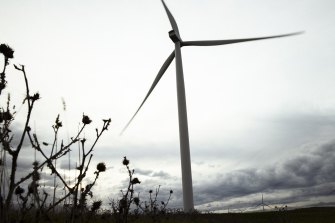 “All governments must now prioritise renewables in their energy generation mix and respond to a world that is long on capital and short on projects.“: Macquarie chief Shemara Wikramanyake.Credit:Dominic Lorrimer

The investment bank chief also threw her support behind the controversial carbon capture and storage technology and pointed to Macquarie’s investment in UK’s Acorn Project, a collaboration between oil and gas companies including Shell. “On carbon capture and storage, we’re working with clients in the energy sector to advance finance for new projects,” she said, adding there needed to be greater collaboration between private and public sectors.

“While the private sector is engaging in all of this, it’s vital that governments connect ambition to detailed plans, policies, and support mechanisms. With the right market environment, the private sector will invest, bringing the scale and innovation that drives down costs.”

Macquarie bought the Green Investment Group off the UK government in 2017 and has transformed the company into one of the world’s leading dedicated green infrastructure investors. Ms Wikramanayake said GIG now has a 240-project pipeline, spanning 25 markets and pointed to the group’s wider efforts on climate.

“We’re working to develop and finance storage and smart grids to support the smooth integration of renewables. And our asset finance and Australian retail banking businesses are bringing the transition to people’s homes, supporting their purchase of [electric vehicles], and the installation of charging infrastructure.”