Former insurance boss Geoff Summerhayes says calling the recent floods a “one-in-500 year event” is a disservice to the public that will delay the overhaul needed in infrastructure and planning to better protect Australians.

Mr Summerhayes, who was Suncorp’s chief executive between 2008 and 2015 and later a board member of the Australian Prudential Regulation Authority, said extreme weather had become the “new normal”. 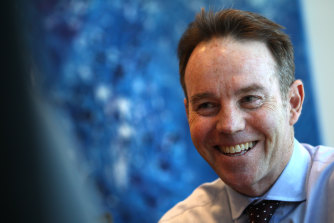 “What’s been so surprising is how surprised people were. This sort of narrative that you can’t plan for something that hasn’t happened before, I don’t think actually cuts it anymore.

“That was an appropriate narrative when we lived in a more stable climate. But the past is no longer a predictor of the future.”

Flash flooding in Queensland and NSW broke previous records, displaced communities and left a wreckage of businesses and homes in what is shaping up to be Australia’s most expensive flood event for insurers.

Mr Summerhayes said this narrative was misleading because it suggested record-breaking weather events would not be repeated. “We are doing a disservice I think to the Australian public by a using narrative that is contextualising these events as that they’re not going to happen again for another 500 years,” he said.

Mr Summerhayes said this attitude would delay the necessary reform to infrastructure investment and planning laws, with a broad overhaul needed to minimise community harm.

“Many people in Australia have travelled to Asia where you do get monsoonal events, you walk down streets, you have to step over high gutters. That sort of infrastructure doesn’t exist here.”

Mr Summerhayes was a senior executive at major insurer Suncorp in 2005 when Cyclone Larry wiped out the Queensland town of Innisfail. The insurer rebuilt the town using different building standards and when Cyclone Yasi hit six years later, Mr Summerhayes said the houses were unscathed. “That’s an example of resilience and changing of thinking in a forward sense.”

This masthead previously reported National Recovery and Resilience Agency head Shane Stone called for an end to floodplain development and criticised flood victims for blaming the government for damaged property.

Mr Summerhayes said preventing people from rebuilding in areas was an “emotional issue” because it would devalue property prices and displace people from their homes but added it was “absolutely” something that should be considered.

“If we’re armed with the appropriate information we can then make our own decisions as businesses, individuals, communities, about how we respond.

“Of course, Australia has always flooded, and we’ve always had droughts. My key point is the nature of the past is no longer a predictor of those events.”