Senior company sources have told The Sydney Morning Herald and The Age Mr Baird lacks the necessary banking experience to be a considered for the role, one of the biggest in corporate Australia. 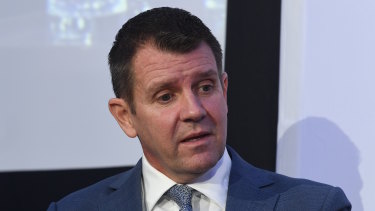 Mike Baird: “I have an open mind about what I will do next.”Credit:Peter Braig

Mr Baird resigned as the leader of National Australia Bank's retail bank on Thursday. He has privately ruled out a return to politics amid rumours he might put his hat in the ring for the federal seat of Warringah, currently held by independent MP Zali Steggall. He is expected to eventually take up another senior role in the corporate sector.

Media speculation has linked Mr Baird to the vacant chief executive position at Westpac. The big four lender is currently led by former CFO Peter King on an interim basis after former leader Brian Hartzer was ousted amid the money-laundering scandal that sent into turmoil late last year.

But senior Westpac sources downplayed Mr Baird's chances. "I don't think he has the skills. You need to be an experienced banker," said one senior company source, who could not speak publicly due to the confidential nature of the company's search process.

Before politics, the 51-year-old spent five years at HSBC, two years at Deutsche Bank and had two stints at NAB that totalled nine years. But he never reached chief executive level at any financial institution.

Westpac is still months away from making a decision on its new chief executive.

It is unclear if Mr Baird has signed a non-compete clause with NAB as his contract is confidential although it is not unusual for banking executives to jump between competitors. Bank of Queensland chief executive George Frazis took the reigns at the Queensland lender after nine years at Westpac, four years at NAB and two years at Commonwealth Bank before that.

Mr Baird, a northern beaches resident, left politics in 2017 mid-way through his term as Premier despite strong polling. It came amid difficult personal circumstances with members of his extended family suffering from illnesses.

His resignation speech highlighted the state's low unemployment and levels of crime and his government's investment in hospitals but his controversial lock-out laws for Sydney and a backflip over a greyhound racing ban upset some voters.

On Thursday evening, Westpac filed a statement to the ASX announcing chairman Lindsay Maxsted would officially step down on March 31, another casualty in the financial crime scandal.

The veteran chairman, who joined the board in March 2008, will be replaced by former ANZ chief executive John McFarlane on April 1, marking the start of the bank's second half that is likely to be dominated by multiple shareholder class actions and a mammoth fine by the courts.

In the statement, Mr McFarlane gave a heartfelt farewell to his predecessor: "I know that I speak for many at Westpac when I say that Lindsay's guidance and counsel will be greatly missed."