Troubled investment manager Magellan has sold its stake in Mexican restaurant chain Guzman y Gomez to a group of high net worth individuals as part of a plan to refocus on its core asset management business.

Magellan on Monday announced it had reached an agreement to sell its 11.6 per cent stake in Guzman y Gomez for about $140 million to a trust fund, which represents a 36.3 per cent premium on its entry price in January 2021. 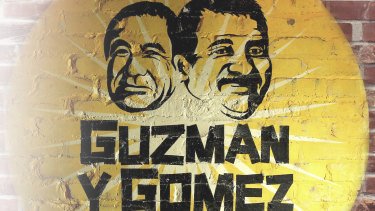 Magellan has sold its stake in Guzman Y Gomez.

“[Guzman y Gomez] is an outstanding company, however, the sale of our shareholding is consistent with our strategy to focus on our core funds management business,” he said.

Guzman y Gomez delayed plans to list on the ASX last March after Douglass invested $86.8 million in the company, a significant stake that enabled the chain to refit its restaurants.

“He called us up and he said ‘I love you, and I’ve got to get involved’,” Guzman y Gomez chief executive Steven Marks said of a phone call from Douglass at the time.

At the time, Douglass defended the assets, predicting the businesses would show profitability over the next three to five years. “You’re going to look back and say they were smart investments,” he said.

Marks recently told this masthead he had plans for the Mexican food chain to expand by more than 30 stores every year over the next 15 years, with most of these in a drive-through format.

While an ASX float has been put on hold twice, Marks said in December last year that a float remained part of its long-term plans. “I love the idea of it. But right now, we’re in no rush,” he said. “The company is very healthy. When the time is right, then we will.”

In a statement, Marks said Guzman y Gomez was continuing to go from strength to strength. “We are pleased that Magellan ha[s] been able to get a strong return on their investment for their shareholders,” he said.

Magellan said the sale of Guzman was arranged by Barrenjoey Capital Partners. “The outcome we have achieved with this transaction reinforces the strength of our partnership with Barrenjoey. We remain committed to the long-term success of Barrenjoey as a major shareholder,” McLennan said.

Douglass has been on sick leave since February after a leadership crisis sent the company into turmoil. Magellan’s funds under management and share price have since been in freefall, with latest figures showing the company manages $68.6 billion – down from highs of $113.9 billion mid-last year.

After stepping up as chair in February, McLennan announced Magellan would make no new investments in Magellan Capital Partners and would instead focus on improving asset management, retaining staff, lifting governance and engaging with customers.

Magellan’s asset management business has suffered perpetual outflows, caused by the relative underperformance of its flagship global equities fund. Many institutional clients had investment mandates that specified Douglass remain in the role but there remains no timeframe for when he will return.

Thursday's trading: 5 things you should know