Wealth management group IOOF has reported a $36.4 million drop in underlying profit, in line with market expectations following the sign-off on the takeover deal of ANZ’s superannuation and investments arm earlier this month.

In reporting its half-year results, IOOF said most of the profit decrease was due to a change in interest over the $850 million deal to buy ANZ's OnePath as well as mounting legislative and competitive pricing costs. 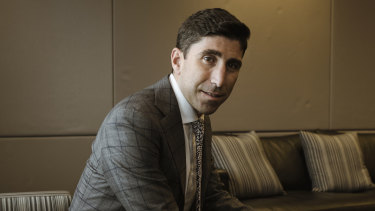 The deal, which was discounted by $125 million, was finally inked just over two weeks ago following a series of regulatory hurdles and delays but now IOOF will start integrating the superannuation and investments business.

The acquisition contributed to the growth in the company's funds under management by 5.2 per cent to $145.7 billion. IOOF chief executive Renato Mota described the acquisition as a "step change" that would boost earnings per share.

"This increased size and scale improves our ability to invest in and deliver market-leading solutions, delivering more value to clients," Mr Mota said in a statement to the ASX.

IOOF allocated $223 million for remediation costs in August for providing poor financial advice to customers revealed by the Hayne royal commission. Despite market speculation over whether this figure might climb, the half-year report reveals there will be no change to this provision.

The company spent $9.5 million on remediation investigations in the half, up from $3.8 million the same time last year. IOOF has also engaged financial consultant Deloitte to assist with remediation.

IOOF is now the second-largest advice business with 1443 advisers following 11 new businesses joining the group in the second half of the financial year.

"The right leadership and organisational structure are fundamental to our future growth strategy as we transform the business and look to capitalise on the rapidly evolving opportunity set post the P&I [pensions and investments] acquisition," Mr Mota said.