Disney’s Bob Iger out as CEO

Walt Disney CEO Bob Iger is reportedly stepping down from his role immediately and has named Bob Chapek as the new CEO.

Disney CEO Bob Iger began his ride into the sunset Tuesday after nearly 15 years at the helm of the entertainment giant, but he's leaving investors with magical memories, from the acquisition of the lucrative "Star Wars" franchise to a four-fold gain in the company's market value.

Iger, who was succeeded by parks, experiences and products chief Bob Chapek effective immediately, will hold the title of executive chairman through 2021.

DISNEY NAMES BOB CHAPEK CEO; IGER TO CHAIR BOARD THROUGH 2021

The 69-year-old's legacy includes major purchases from Pixar to Marvel, Lucasfilm, Fox's entertainment properties and Hulu. The transactions, which cost over $114 billion, transformed Disney into a media juggernaut: 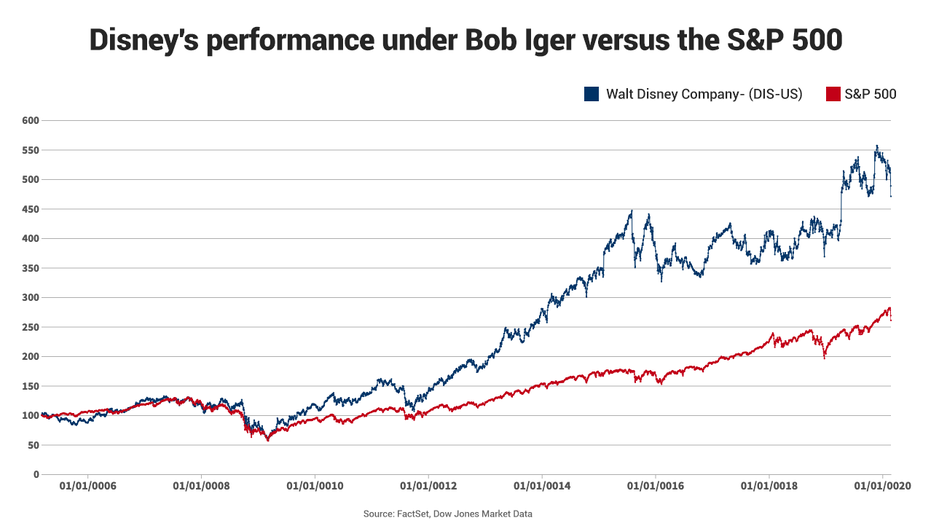 Iger’s departure comes at a critical time for Disney, which is heading into a new frontier with the recent launch of its Disney+ streaming service and the closing of its Fox acquisition. As the company shapes its roadmap for the future, Chapek will have to make some tough decisions on whether to sell assets, including ABC and ESPN, according to Wells Fargo analyst Steven Cahall.

“It’s not unrealistic to posit that this long-debated split could be the next legacy a bit down the road, and a logical reason to pass the torch now,” Cahall said. “At the very least, we think the new CEO has plenty of options and will benefit from the luxury of having a top-notch predecessor to build things for success."