Emma Welsh and Tom Griffith were struggling with their drinks business, Emma & Tom’s, but buying a van turned everything around.

“We didn’t have good enough systems back in those days, and it took us a long time to work out we were churning 40 per cent of our customers by using a distributor,” Griffith says on the sidelines of Netsuite’s SuiteConnect conference in Sydney.

“Emma was sitting at her computer on a wet August afternoon and she said: ‘We can trade our way out of this’. We basically got the van and started selling from it.” 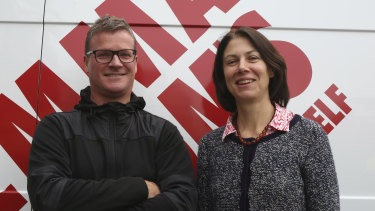 The childhood friends, who first met during swimming lessons at Harold Holt memorial pool, started Emma & Tom’s in 2004 after spotting a thirst for green juices in Australia.

The business now turns over more than $10 million a year and its range has expanded to 80 products, including juice, kombucha, kefir water and healthy snacks.

Griffith and Welsh trace their success to a decision to take on distribution themselves.

“The distributor upped their minimum order, so they had a more efficient drop; so the shops often couldn’t sell or keep chilled what they were required to order,” Griffith says. “We were driving around replacing old stock rather than selling.” 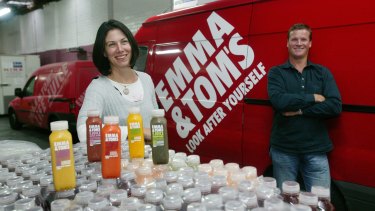 “I had to go and borrow $100,000 from a mate,” Griffith says. “We started our own vans and our cash flow went from 90 days to zero days – and that funded the turnaround. Once the vans started rolling on the road, we started using our distribution hat and going: ‘What more can we sell from the vans?’ So that bit of failure was actually the turnaround point.”

Welsh says that, when they started losing customers, they knew it wasn’t the product – it had to be the service.

“It meant we changed the business model. We became a brand with its own distribution as opposed to a brand outsourcing its distribution,” she says. “I don’t think we would have survived in business if we hadn’t started doing our own distribution.”

Emma & Tom’s now has a fleet of 40 refrigerated vans that deliver to 8000 outlets nationwide. Griffith and Welsh say having their own distribution network sets them apart from their competitors.

“The vans give us great flexibility. And we also think that the vans, because they are branded of course, if you cost them as the equivalent of, say, a bus shelter (which has two sides as opposed to four in a van), they are worth up to $5 million a year in equivalent ad spend,” Griffith says.

Emma & Tom’s has been able to capitalise on increases in demand for healthy food and drinks.

Economic analysis published by the CSIRO last year found the rising interest in healthy and sustainable lifestyles could be worth $25 billion and comprise 10 per cent of the value of Australia’s food and agribusiness sector by the end of the decade.

Griffith says orange juice sales are down 20 per cent globally because customers view more commoditised products as a mere hit of sugar, but other products are attracting increased demand.

“We’ve found that people have followed us because they know that we innovate,” he says. “So if they see it – an Emma & Tom’s kefir water or Emma & Tom’s kombucha – they’re pretty happy to try it because of the brand strength. We always produce things that taste good and are good for you – and people trust us.”

Welsh says the pair want to continue to grow Emma & Tom’s and make it a much bigger business.

“We think there is a big opportunity to do more with the major supermarkets and big food service companies,” she says. “That is where the business can start to grow and become a bigger and more profitable business.”

The pair say tenacity has got them through.

“And frankly, if you can find a business partner you really get along with, it makes life easier.”