Australia’s largest investors are dumping hundreds of millions of dollars worth of Russian shares and condemning the Kremlin’s invasion of Ukraine as the international community tightens sanctions and squeezes Vladimir Putin’s economic resources.

The Future Fund, the sovereign wealth fund chaired by former treasurer Peter Costello, with about $200 million invested in companies listed on the Russian stock exchange, will be winding down its remaining exposure, a spokesperson said. 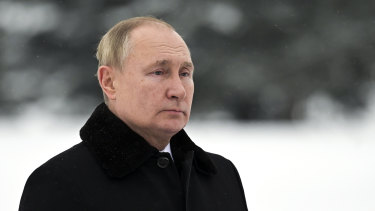 Australian investors are ripping hundreds of millions of dollars from Russian companies in response to the Kremlin’s bloody invasion of Ukraine. Credit:AP

Australia’s richest man and Fortescue Metals chairman Andrew Forrest said his company would discontinue plans to explore hydrogen projects in Russia. “We will be withdrawing major investment considerations from Russia because we cannot tolerate any circumstance where one country invades another,” Dr Forrest said.

Australia’s largest superannuation fund, AustralianSuper, has a string of investments in Russia’s largest companies, according to recent disclosures, including about $139 million in Sberbank, the largest state-owned bank singled out by US sanctions.

Aware Super chief investment officer Damian Graham, who oversees more than $160 billion, said his team had divested about $50 million worth of Russian investments since late last week, including stakes in Gazprom and Lukoil.

Mr Graham said the fund moved quickly because it might soon be impossible to sell these assets. “They’re trying to ensure foreigners don’t sell out of their market,” Mr Graham said. “The next leg is to ensure we can access the money.”

He said the private sector should “take action” to isolate Russia. “I do believe that our actions should align to views in our conviction,” he said. “We certainly feel for the Ukrainian people, it’s a terrible situation they’re facing.”

Treasurer Josh Frydenberg said it was his expectation that “every fund will review their holdings and where consistent with their legal duties seek to divest any Russian holdings”.

Dr Fahy, whose peak body covers 90 per cent of the $3.4 trillion super industry, said efforts to divest from Russia were part of funds’ “normal risk management policy” rather than any coordinated effort to boycott the country amid escalating conflict with Ukraine.

Hostplus has about $18 million invested in Russian equities and $800,000 in Russian bonds. Chief executive David Elia said the fund was liaising with investment managers to assess what actions can be taken before condemning the violence.

“I came to this beautiful country with my family as a seven-year-old Lebanese refugee in 1976 having fled the ravages of war,” Mr Elia said. “What is happening in Ukraine [is] simply heartbreaking and senseless.”

Other superannuation funds, including Hesta, Colonial First State, AMP and Prime Super, confirmed they would review existing exposures and monitor the evolving conflict. ANZ Bank confirmed it had a “negligible” exposure to Russia but did not comment on whether this would be divested.

Federal shadow assistant treasurer Stephen Jones called on the finance sector to divest all holdings from Russian companies. “It has to be done. It’s not just about banks, it’s not just about resource companies … It’s about the whole economy giving a clear signal,” he said.