The ANZ result highlights one of the unexpected outcomes of a pandemic-afflicted 12 months. For the banks, as for many large businesses, it is as if the pandemic never occurred.

Indeed, at an underlying level, ANZ’s interim is broadly similar to the results it posted in pre-pandemic 2019. 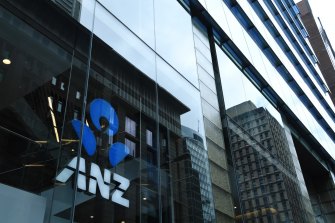 When ANZ is more certain that the pandemic risks are contained, there will be some meaningful returns of capital to shareholders.Credit:Louise Kennerley

It’s as if the pandemic has barely registered within the bank’s numbers (its actual operations were, like most businesses, radically affected) and the bank has simply soldiered on in the low-growth, low-margin but relatively stable banking environment of the pre-pandemic years.

The unprecedented actions of the federal and state governments and the Reserve Bank have obviously played a huge role in protecting the economy, households and businesses, including the banks, from the dire outcomes anticipated a year ago when there were forecasts of a double-digit collapse in GDP and soaring unemployment.

Given the biggest of the government programs, Jobkeeper and Jobseeker, essentially ended in March, it would be premature to declare victory, particularly as the virus and its mutations continue to rage offshore and remain an ever-present threat here.

With 98 per cent of the ANZ homes loans and 96 per cent of the small business loans where payments were deferred having resumed repayments and less than $1 billion of residual exposures to the rest, however, the legacy of the pandemic thus far is far more modest than anyone could have anticipated when the severity of the threat was first recognised last year and the banks began piling up capital and provisions against the expected wave of losses.

That surprisingly muted impact is showing up, and distorting, the results the banks are now reporting.

As was the case with Westpac earlier in the week, ANZ has begun writing back some of the insurance policy it took out last year when it added $1.7 billion to its collective provisioning as cover for COVID-19-related losses.

It has now “released” about a third of that extra provisioning, or $678 million, which allowed it to report a 112 per cent increase in cash earnings, to $2.99 billion, and also enabled it to pay an interim dividend of 70 cents a share, double last year’s final dividend.

If that writeback were disregarded, the bank’s earnings before provisioning, tax and one-off items was down about 4 per cent on the September half last year.

As the experiences offshore continue to demonstrate, a premature declaration of victory or a sense of complacency are not yet sensible options.

That’s a better indication of the relatively subdued external environment and the intensity of the competition within banking’s current “hot spot,” lending for housing.

At a more granular level, ANZ was disciplined on costs, with the costs within its core Australian bank down 2 per cent and, despite the ultra-low interest rate environment, was able to add 3 basis points to its underlying net interest margin, lifting it to 1.6 per cent.

Despite those achievements, significant increases in customer activity – a 50 per cent increase in home loans, for instance – and a $3 billion increase in risk-weighted assets within the Australian bank, the group’s income fell.

Most of the $800 million decline in income (about $500 million) was related to understandably lower activity and revenue from institutional activities that have a very large offshore exposure (and which had an exceptional contribution from markets income last year) but even the core banking businesses experienced some shrinkage within their revenue bases.

Leaving aside the pandemic, banking has become a tough, competitive low-growth sector where the only response to the subdued conditions that’s within the control of the bank is an increased focus on costs.

There’s more than a glimmer of eventual upside for ANZ shareholders.

With $7 billion of capital above the “unquestionably strong” regulatory minimum – ANZ’s common equity tier one capital ratio is 12.4 per cent — and $4 billion of provisioning, including about $1 billion left from last year’s pandemic-induced additional caution, it is obvious that if and when it is more certain that the pandemic risks are contained, there will be some meaningful returns of capital to shareholders. 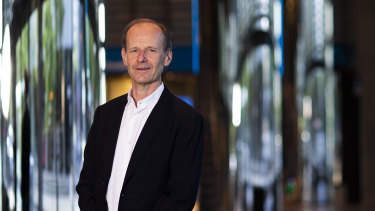 While the size of the interim dividend will be gratefully received by shareholders the outlook for future dividends and any capital management will remain clouded by the pandemic.

ANZ knows the outer limits of is residual exposures to COVID-19 impacted lending today – that’s the outstanding $1 billion of loans with deferred payments – and the actual risks will be clearer by June as borrowers within that category either show up in the “90 days past due” category or resume payments.

What neither ANZ nor its peers know is whether there will be another outbreak of infections and further lockdowns, or a regulatory response to try to contain the boom in housing markets.

Until Treasurer Josh Frydenberg brings down the federal budget they also don’t know whether the government will continue with its expansive fiscal policy even as the economy is bouncing back far more strongly than anticipated (the expectation is that it will) or start to tighten its purse strings to contain the size of the blowouts in deficits and debt.

They also don’t know whether supply chain bottlenecks and labour shortages will cause an outbreak of inflation and force the RBA – which appears to be planning to retain the cash rate at 0.10 per cent until at least 2024 — to respond by lifting interest rates.

ANZ also has bigger exposures outside Australia than its peers (albeit significantly smaller and different in risk-profile to those it had before it re-engineered its Asian strategy and withdrew from retail and commercial activity) and therefore has some different risks to assess.

With continuing uncertainty about the course of the pandemic and the outlook for the domestic economy once the legacies from last year’s traumas have been cleared it makes sense for ANZ and its peers to retain a big chunk of excess capital against those uncertainties and risks.

As the experiences offshore continue to demonstrate, a premature declaration of victory or a sense of complacency are not yet sensible options.