When the Trump administration imposed sanctions on 11 senior Hong Kong officials, including chief executive Carrie Lam, just over a week ago, the responses of the individuals targeted ranged from the dismissive to derision. Banks and mainland China’s financial authorities aren’t as complacent.

The sanctions were imposed on those individuals the US deemed had materially contributed to the undermining of Hong Kong’s autonomy through the imposition of the broad national security laws the city-state enacted after last year’s violent anti-government protests. 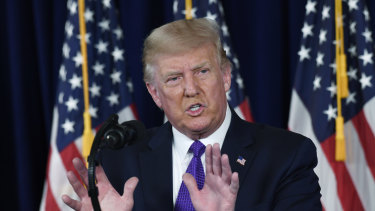 The willingness of the US to use the dollar’s dominance of global financial activity as a weapon has underscored a larger threat to China and its financial system.Credit:AP

The sanctions freeze any property or other assets owned, directly or indirectly, by the 11 individuals that are in the US or controlled by Americans or American institutions. More significantly, they also bar – and would penalise – any financial institution than knowingly does business with those sanctioned.

The targeted officials were scornful of the sanctions largely because they claim to have no assets in the US or denominated in US dollars. One official, Luo Huining, the director of China’s Liaison Office in Hong Kong, offered to send "$US100 to Mr Trump for him to freeze." Carrie Lam said she wouldn’t be intimidated by the US actions and mocked the US for getting her address wrong.

Banks in Hong Kong, however, aren’t as sanguine. Some, like Citigroup, acted quickly to close accounts associated with the sanctioned individuals even though Hong Kong’s monetary authority said that unilateral sanctions had no legal status in Hong Kong and banks were not obligated to comply with them.

The individuals can respond to the US action by shifting their banking activity to China’s domestic banks but the willingness of the US to use the dollar’s dominance of global financial activity to target them has underscored a larger threat to China and its financial system that China and banks – whether Chinese or international – now realise is very real.

The Trump administration has been ratcheting up its rhetoric and actions against China and Chinese companies, with the administration seizing the ability to blame China for the coronavirus pandemic to respond to China’s growing challenge to America’s economic supremacy (and to shift the focus away from the administration’s bungled response to the pandemic).

After last year’s assault on China’s exports, the focus of the anti-China efforts has shifted to technology and finance.

The forced sale of TikTok, the banning of Huawei and WeChat and other Chinese technology companies and the imposition of US audit standards on Chinese companies listed in the US (under threat of de-listing) are part of an escalation of the administration’s responses to China’s stated ambitions to overtake the US in technology and challenge, or at least reduce, its dominance in finance.

China is acutely aware that the Hong Kong sanctions have opened a new and far more serious front in the tensions with the US. It would be relatively easy for the US to extend the sanctions from the individuals to others, including banks, it decides have been complicit in China’s actions in Hong Kong. 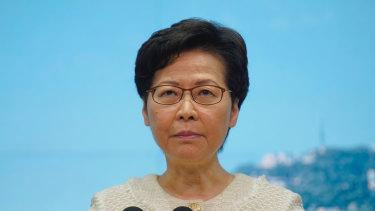 Carrie Lam said she wouldn’t be intimidated by the US actions. China is not so complacent.Credit:AP

In the front line are the banks, and not just western banks with a presence in Hong Kong.

It’s not only banks. Investment banks, brokers, insurers, hedge funds, private equity firms and fund managers more generally will be checking to see whether they have any exposures, direct or indirect, to the sanctioned individuals and war-gaming their options for responding to more broadly-based actions by the US.

China’s own banks could also be impacted. Its largest banks – the Bank of China, China Construction Bank, China Merchants Bank, the Industrial and Commercial Bank of China, the Agricultural Bank of China and others – have extensive offshore operations and more than $US1 trillion of US dollar funding.

Given the unpredictable nature of the Trump administration; the obvious increase in the influence of the anti-China elements within it; the hardening of rhetoric and actions in response to the pandemic and the imminence of an election in which Trump sees the targeting of China as a winning issue, the potential for escalation can’t be ruled out.

China is very aware that if the US were to fully weaponise the dollar’s dominance it could cause chaos within its financial system.

The dollar is the dominant currency for the world’s financial transactions and for settling international trade activity. The dollar’s dominance also gives it an oversized influence over the SWIFT messaging and confirmation system central to cross-border financial activity.

If the US extends the sanctions it could – as it has done to Russian officials and organisations and to Iran North Korea and Venezuela – lock China and its institutions out of settling US dollar-denominated transactions anywhere in the world.

China is very aware of that threat and has been for some time. It has made a significant effort to internationalise its own currency and its usage with some, but limited, success. Most visibly, it struck a deal with Russia to use the yuan and rouble to settle transactions between the two economies and those currencies now account for about a quarter of all dealings between Russia and China. 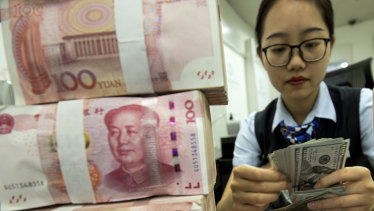 China has been pushing to make the yuan a more international currency, with limited success.Credit:AP

China’s authorities and financial regulators are pushing harder for an increased role for the yuan in global trade.

They are urging their institutions to increase its usage, in the face of the threat of being, if not expelled from the dollar settlement system, then constrained in their access to it if the US decides to exercise its nuclear option and force a wider decoupling of the two financial systems.

Given the unpredictable nature of the Trump administration; the obvious increase in the influence of the anti-China elements within it; the hardening of rhetoric and actions in response to the pandemic and the imminence of an election in which Trump sees the targeting of China as a winning issue, the potential for escalation can’t be ruled out.

A former French finance minister, Valéry Giscard d’Estaing, once described the dollar’s dominance as an "exorbitant privilege," giving it an over-sized role in global finance, immunity from any balance of payments stresses and access to funding – and living standards – on terms subsidised by the rest of the world.

Widening the sanctions to include individuals and institutions beyond the 11 targeted so far would weaponise that privilege and, even if regarded as an abuse of it by the rest of the world, would have a dramatic and highly destructive impact on China and its aspirations.

It would also, however, be likely to ignite turmoil, and large-scale losses, within US financial institutions and markets and would therefore be a risky/desperate move by an administration that appears to be increasingly desperate to shift the tide of its domestic politics.