Commonwealth Bank chief executive Matt Comyn says further interest rate rises will clearly be on the table in the last two Reserve Bank board meetings of 2022 following this week’s surge in inflation, and the bank is closely watching the impact of soaring energy costs.

The head of Australia’s largest bank on Thursday said the September quarter inflation figures, which showed consumer prices rising at their fastest pace in 32 years, were stronger than the lender had expected.

“I think it certainly brings the prospect of rate hikes in November and December very clearly onto the table,” Comyn told journalists. 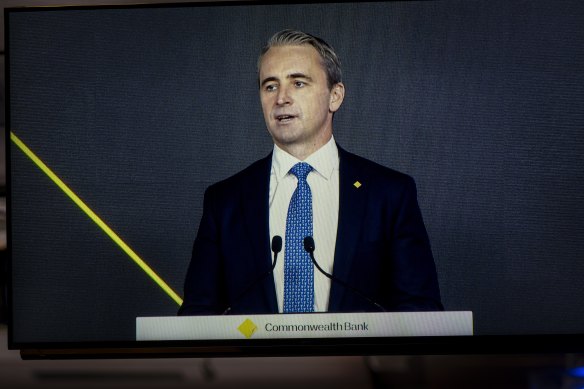 His comments come after economists at each of the big four banks have this week raised their forecasts for interest rates following the surge in inflation, which has hit an annual rate of 7.3 per cent. Westpac chief economist Bill Evans on Thursday tipped a 0.5 percentage point rise in November, which would take the cash rate from 2.6 per cent to 3.1 per cent.

After the federal budget forecast a 56 per cent surge in electricity prices over the next two years, Comyn said CBA was concerned about the impact such steep price rises would have on households.

“Energy costs are a reasonable proportion of any household’s expenditure and if something’s rising by, let’s call it 30 per cent over the next 12 months… clearly that’s a concern for us, for our customers, for the broader economy,” he said.

Comyn said some business clients of CBA were also facing a “very substantial” increase in their electricity bills as a result of sharply higher wholesale prices. Even so, he supported the government’s decision not to pay subsidies to households to shield them from soaring electricity bills, backing Treasurer Jim Chalmers’ argument that higher budget spending could make the country’s inflation problem worse.

“I don’t think they should be providing financial support [in response to high energy costs], I think that’s right,” Comyn said.

“I very much support the Treasurer’s view about making sure that fiscal and monetary policy are working together. ”

Comyn was speaking on the sidelines of a CBA conference on sustainability, at which he said the bank was taking steps to its cut carbon-intensive lending while the world faced an “energy crisis” caused mainly by geopolitical forces, including Russia’s invasion of Ukraine.

Comyn, who appeared on a panel with Telstra chief executive Vicki Brady and Qantas boss Alan Joyce, said the critical climate goal for the bank was to cut the emissions of customers that it lent money to, such as fossil fuel producers.

“We have a trillion-dollar balance sheet. Less than half of 1 per cent is lending to fossil fuels. It’s down by 60 per cent over the last five years, and I don’t say that defensively. But even though it’s tiny, it’s 27 per cent of our total financed emissions,” Comyn said.

“I say that… against the context of an energy – I don’t like using the word crisis too often – but genuinely an energy crisis over the next few years, and trying to work through our role.”

Amid pressure from investors and regulators for banks to assess climate risks, the bank has previously revealed details of “glide paths” to support decarbonisation across its diverse portfolios.