The Commonwealth Bank will allow its customers to trade a range of cryptocurrencies including bitcoin, in the first move by an Australian bank into the polarising asset class.

In a major vote of confidence in crypto assets, the country’s largest bank on Wednesday said it would soon start a pilot program allowing customers to buy, sell and hold 10 crypto assets through its app. 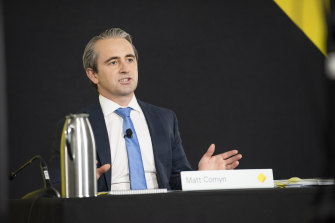 Chief executive Matt Comyn acknowledged cryptocurrencies were divisive among banks and were being looked at closely by regulators, but he argued customer demand for the assets from young people especially was strong, and not about to fade.

“We believe we can play an important role in crypto to address what’s clearly a growing customer need and provide capability, security and confidence in a crypto trading platform,” Mr Comyn said.

The bank will in the coming weeks launch the crypto trading features on its app to a group of customers, and it is seeking to make security a key selling point.

“Customers have expressed concern regarding some of the crypto services in market today, including the friction of using third party exchanges, the risk of fraud, and the lack of trust in some new providers. This is why we see this as an opportunity to bring a trusted and secure experience for our customers,” Mr Comyn said.

Mr Comyn acknowledge the high volatility of crypto assets said there would be a disclaimer to customers to the effect that they should only invest what they are prepared to lose. He said trades were typically in the hundreds of dollars.

The foray into cryptocurrencies by the country’s largest bank follows moves by buy now, pay later operators Afterpay and Zip into the sector. Under Mr Comyn, CBA has sought to compete aggressively with the new wave of fintechs, including launching its own buy now pay later service earlier this year.