Robots may be packing, shipping your next online order

TORONTO  — Prime Minister Justin Trudeau said Friday indigenous barricades that are blocking rail service across Canada and hurting the economy have to come down now.

Trudeau said that court injunctions must be obeyed and that the situation is unacceptable and untenable and every attempt at dialogue has been made over the last two weeks.

Protesters later left a barricade site south of Montreal late Friday after riot police arrived. They earlier had begun dismantling their encampment. A spokesman for the protesters vowed that other blockades would appear, and protesters remained at other rail protests sites. 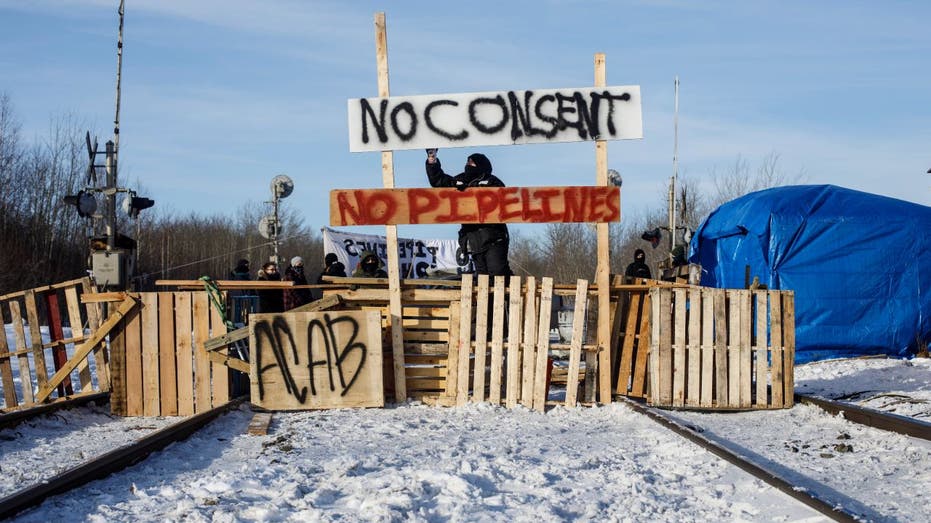 Supporters of the Wet’suwet’en who are against the LNG pipeline, block a Canadian National Railway line just west of Edmonton, Alberta, on Wednesday, Feb. 19, 2020. (Jason Franson/The Canadian Press via AP)

Demonstrators have set up blockades in British Columbia, Ontario, Alberta and Quebec in solidarity with opponents of the Coastal GasLink pipeline project that crosses the traditional territory of the Wet'suwet'en First Nation in northwestern British Columbia. Some hereditary chiefs in the Wet'suwet'en First Nation oppose the natural gas pipeline, though it has received approval from elected band councils.

Trudeau said some people can't get to work and others have lost their jobs. He said there is no point making the same overtures to indigenous leaders if they aren't accepted.

"We can't have dialogue when only one party is coming to the table," Trudeau said. “The onus is on them.”

Via Rail, Canada's passenger train service, said this week it is temporarily laying off 1,000 employees due to the continued halt in service on CN Rail's tracks in eastern Canada caused by the blockades. CN Rail also announced 450 temporary layoffs.

The crisis is daily stranding goods worth an an estimated 425 million Canadian dollars ($340 million), according to the Canadian Manufacturers and Exporters trade group. 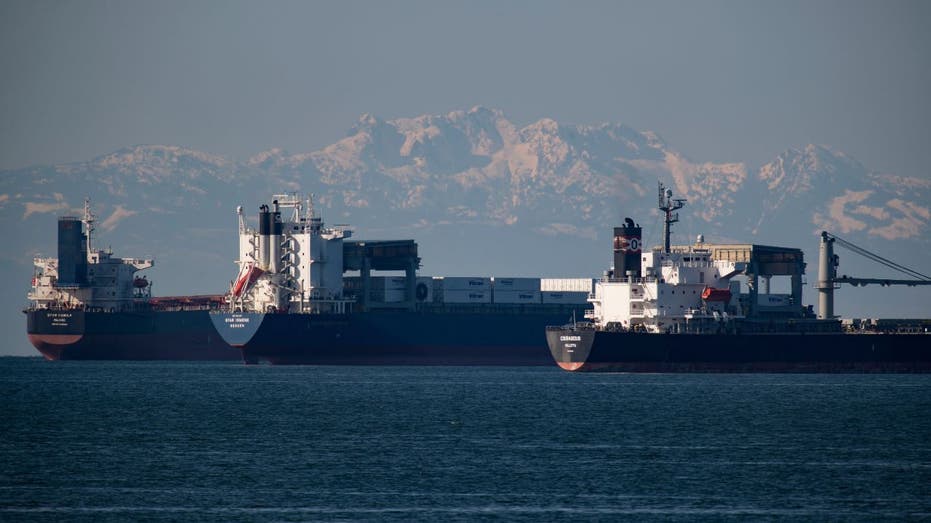 Cargo ships sit at anchor on English Bay, in Vancouver, on Thursday, February 20, 2020. Rail blockades across the country have led to an increase in the number of cargo ships waiting to load or unload according to the Port of Vancouver. (Darryl Dyck/

Trudeau said the army won't be called in, saying troops aren't used against Canadian citizens. He said removing the barricades must be done peacefully.

The prime minister said officials have feared from the start that the situation could get worse and spent the last two weeks showing good faith in an effort to resolve the dispute. He said it would be lamentable if there was violence when the barricades are taken down, but added that Canadians cannot continue to suffer as a result of the rail shut down.

Trudeau has made reconciliation with Canada's First Nations a priority for his government but the blockades could risk public support.

"We are waiting for Indigenous leadership to show that it understands," he said.

Trudeau met with his top Cabinet ministers Friday. Repeated offers to have ministers meet with Wet'suwet'en hereditary chiefs to address their issues have not been accepted, Trudeau's office said. 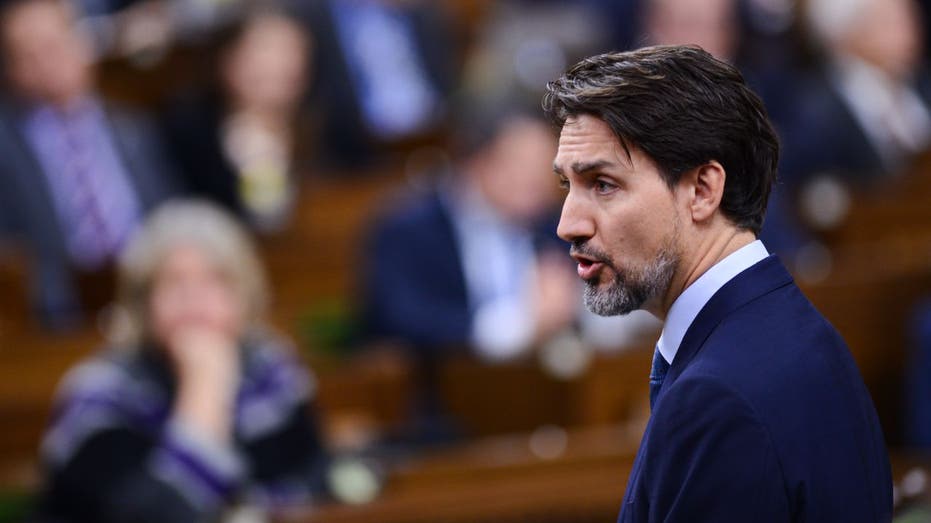 KEYSTONE XL: WHAT’S NEXT FOR PIPELINE IN SOUTH DAKOTA

One of the traditional chiefs of the Wet'suwet'en Nation said his people are willing to engage in talks, but not until the Royal Canadian Mounted Police in British Columbia have left traditional Wet'suwet'en territory entirely and Coastal GasLink, the pipeline company, ceases work in the area.

Until their demands are met, the barricade in Ontario erected by the Mohawks at Tyendinaga will not come down, said Kanenhariyo, who also goes by Seth LaFort, of the Mohawks of Tyendinaga.

"There is a difference between inconvenience and injustice — total difference. Don't confuse one with the other," he said. 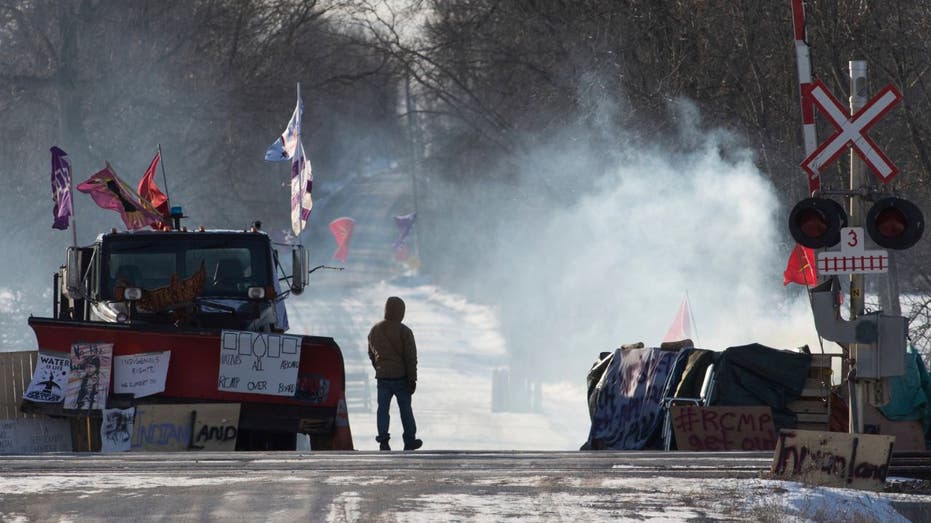 A protester stands beside smoke at the closed train tracks in Tyendinaga Mohawk Territory near Belleville, Ontario on Thursday Feb. 20, 2020. (Lars Hagberg/The Canadian Press via AP)

The blockades have led to backlogs at Canada's three biggest ports, prompting some shippers to take their business to the U.S. as cargo piles up.

In Montreal, some 4,000 containers sit immobilized on the docks and Prairie bulk products like grain can no longer reach the port. The number of ships waiting at anchor to enter Vancouver-area terminals has more than doubled to 50 due to the clogged transportation system, though no vessels are opting for U.S. ports as a result, said Vancouver Fraser Port Authority spokeswoman Melanie Nadeau.