Home » Markets » ‘Build the next McDonald’s’: Guzman y Gomez heads to the US on way to IPO

When Steven Marks moved to Australia from the United States he was appalled by the Mexican food on offer. "I literally went to every single Mexican restaurant in Australia and they sucked, they were horrible," the born and bred New Yorker says.

With childhood friend Robert Hazan he launched burrito chain Guzman y Gomez in 2006 "to reintroduce a cuisine to the country". Fifteen years later the business is on track to turn over $300 million, with Marks and his backers targeting a sharemarket float in the next two to three years. 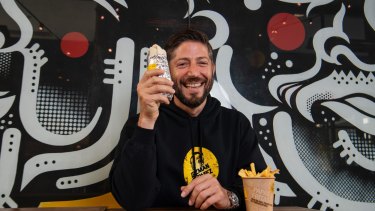 The Mexican food chain has grown steadily from one store in Sydney's Newtown to 139 around the country, along with stores in Singapore and Japan. Now it's looking to America, with a store launched in Chicago last month.

Guzman y Gomez – named after two of Marks' childhood friends – sells a quick and 'clean' take on Mexican food made from fresh ingredients with no preservatives or additives. To fulfil its founders' and investors' goals, it will have to overcome rising regulatory concerns about the franchising business model and investor unease around fast food stocks, and take on a crowded market in the US.

"For the last 13 years, we were building Guzman y Gomez to obviously reinvent fast food for Australia, but then to launch in the US," Marks says on the sidelines of a conference in Sydney this week. 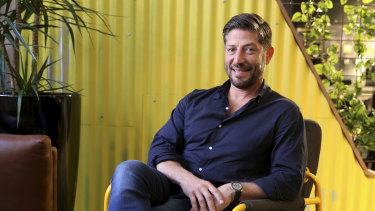 Marks is excited about the size of the potential market in the US and also sees an opportunity with a population familiar with Mexican cuisine in comparison to Australia, where he had to educate customers.

"They thought black beans were olives, they didn't know what a tortilla was," he says. "We were the first one doing slow-cooked pork shoulders but I couldn't call it pulled pork because that was too sexual."

Marks says the "game-changer" for Guzman y Gomez's entry into the US has been opening up drive-through restaurants.

"The reason why I always have the US in mind, even though Australia is home and the foundations are here, is because in Australia, it's so hard to build a great business," he says.

In Australia, it's so hard to build a great business. […] So if you build a brand here that people love, and you can be successful financially, you can go anywhere.

"There's a small population, right, labour costs are so high, fresh fruit and veg is so expensive and rents are so high. So if you build a brand here that people love, and you can be successful financially, you can go anywhere. I truly believe that."

"The labour laws here are so hard to interpret," he says, pointing to the collapse of celebrity chef George Calombaris’ restaurant empire following staff underpayment.

Marks says the issue is the complexity of the system and labour laws need to be updated to reflect a 24-7 economy.

"The labour laws in Australia are so antiquated, it's all we talk about because it would absolutely kill me, like everything our guys have to be paid correctly," he says. "But to interpret it is so difficult, man that's all we do. I think some people are fraudulent but I think a lot aren't. And that's the problem."

From street kid to hedge funds

Marks describes himself as a "street kid" growing up in New York with a single mother who raised three boys.

"My dad growing up was a pool hustler out of Miami Beach and he died homeless and a drug addict," he says. "So I've seen how bad life is."

However with a mind for numbers Marks went to the prestigious Wharton business school at the University of Pennsylvania and got his start working for legendary hedge fund manager Steve Cohen, whose life proved the inspiration for the television series Billions.

"I don't know anything else, I just know complete failure or success," Marks says.

Marks and Hazan started Guzman y Gomez with their own savings and then brought in 10 shareholders including Peter Ritchie, the founder of McDonald’s Australia, Guy Russo, former chief executive of McDonald’s Australia, Kmart and Target, and former McDonald's executive Steve Jermyn, before attracting $44 million from private investment firm TDM Growth Partners in 2018.

These experienced shareholders have helped Guzman y Gomez use franchising to achieve its fast growth. Franchisees pay up to $1 million to buy a Guzman y Gomez store and then ongoing fees of 8 per cent royalty and 3 per cent marketing.

Marks says franchising has had a "bad rap" in Australia which has often been deserved with the parliamentary inquiry into franchising highlighting structural issues with the system.

He claims Guzman y Gomez is different, with 30 company-owned stores ensuring the owners of the business have the same interests as the franchisees.

"Be very wary of a franchise that don't own, doesn't have any corporate restaurants," he says. "We're growing our corporate restaurants. We don't take any rebates. I believe that anybody sort of buys into your dreams that you're accountable to making sure that they fulfil theirs."

Russo, who also chairs the Guzman y Gomez board, was on board as soon as he met Marks.

"I fell in love with him and his food immediately," the fast food and retail veteran says.

"I normally don't invest in startups but I thought this could be great for our grandchildren or we could lose all our money," he says. "I loved the food and I loved him, he had all the passion you wanted in an executive."

Russo says it is "too early to call" whether Guzman y Gomez can succeed in the US.

"I have a pretty philosophical view of overseas expansion because of McDonald's, which is open one shop and wait patiently to see if the customers love it, and if you can get the right economics out of the store," he says. 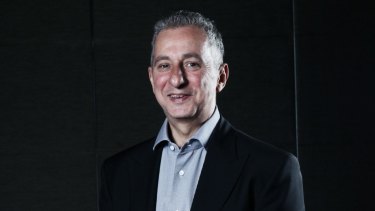 Former McDonald’s Australia, Target and Kmart chief executive Guy Russo is an investor in Guzman y Gomez and chairman of the board. Credit:Peter Braig

All board members are unpaid and Russo is so enthusiastic about the business he was mopping the floors and taking a shift on the drive-through at Guzman y Gomez's Chicago store opening.

"It's exciting to be part of the journey," Russo says.

Investor Tom Cowan of TDM says Guzman y Gomez faces significant competition in the US from incumbent Mexican chains Chipotle and Taco Bell, which between them turn over more than $US10 billion ($13 billion) a year.

The next step for Guzman y Gomez is an initial public offering in two to three years, with Cowan describing the franchise as having "all the qualities required" for a successful IPO.

"My dream as a kid was I always wanted to list the business," Marks says. "I want people to be able to own Guzman y Gomez, to have shares in something that they love.