A beloved independent bookstore in Newtown is the unlikely battleground for a union stoush that could upend workplace relations in Australia.

Better Read than Dead, a Sydney literary institution and a small business with just over a dozen staff, is facing industrial action from employees in the Retail and Fast Food Workers Union (RAFFWU) seeking an enterprise bargaining agreement. 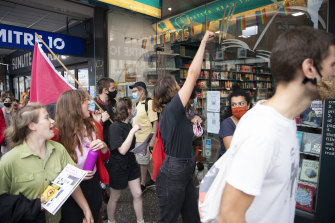 Protesters marching past the Better Read than Dead store in Newtown.Credit:Wolter Peeters

On Friday, more than 110 people, mostly Newtown residents and students at the University of Sydney, supported the Better Read workers at a rally in Camperdown Memorial Rest Park on Friday that then circled around the block past the store.

Emma Cooper, one of several current and former employees who spoke at the rally, said: “We aren’t asking for the world, we’re asking for fair treatment for all workers.”

Another staff member at the rally, Jimmy Gardiner, said most employees were in their late teens and 20s, and he was inspired by the way young people were “fighting for a liveable future” across issues ranging from climate change to workplace rights.

He said Better Read workers not only brought knowledge and skill to the role but this year they had to adapt to processing web orders and click and collect, running book clubs on Zoom, and negotiating QR check-ins. 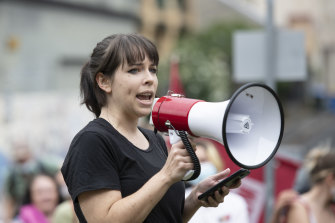 “We’ve had to radically rethink our jobs and at the same time to be rostered on fewer and shorter shifts,” Mr Gardiner said. “What do we get as a thank you for all this work and sacrifice? We get a delay, a change of heart and a stab in the back for surviving the most stressful period of our working lives in a world that is becoming less liveable by the day.”

Better Read’s junior buyer, Lexie Eatock, who was not at the rally, said she was one of several staff who did not agree with the union push because it was “taking on a small business that has just come out of COVID and pretty much dragging it to the ground”.

“Some customers are angry because their web orders haven’t been done and requesting refunds,” Ms Eatock said. “Other customers are taking their business elsewhere and authors are being attacked for coming into the store to do book signings. That’s just not fair.”

Ms Eatock said the business paid award wages, employed very few juniors, and she understood a number of casual staff had been offered permanent positions and turned them down.

RAFFWU secretary Josh Cullinan said the store owners were risking public support, given support for independent bookstores was tied to progressive politics especially in an area like Newtown.

“This is a bookshop that uses a socialist slogan [better red than dead] in their name,” Mr Cullinan said. “They’re trading on a progressive agenda, progressive location, and a progressive customer base.”

Earlier this year more than 300 authors signed an open letter in the Overland journal supporting the union workers, while a welfare fund for staff to help them through lockdown raised $23,000 from the public.

RAFFWU was founded five years ago after a nationwide wages scandal centred on workplace agreements by the conservative Shop, Distributive & Allied Employees Association with major employers including Coles, Woolworths and McDonald’s. 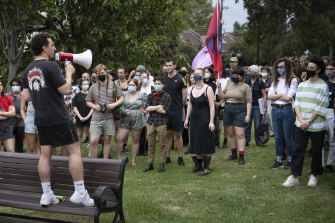 RAFFWU organiser Loukas Kakogiannis addresses the rally in Newtown to support a union push at Better Read than Dead.Credit:Wolter Peeters

The fight has broader implications because small businesses employ nearly half of Australian workers but are mostly non-unionised. Australia’s industrial relations system technically gives all workers the right to collectively negotiate above-award conditions through an enterprise bargaining agreement, but pay and conditions at most small employers are set by the award.

“For a very long time in Australia, the agreements that were made in retail and fast food were for the mega companies, and they were done in a fashion which was not returning value to workers,” Mr Cullinan said.

“[This action] is very important, and it will establish a base for others to do exactly the same.”

Mr Cullinan said workers at Melbourne bookstore Readings, which is a much bigger business, were also trying to organise, and staff at other small retailers, not just booksellers, were closely watching the outcome. 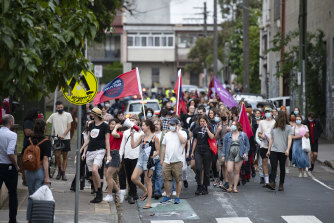 A crowd of Newtown community members and University of Sydney students came out to support the Better Read than Dead rally.Credit:Wolter Peeters

Better Read than Dead employees have been organising since October last year and first launched industrial action, including a refusal to process web orders, in July. Mr Cullinan said they reached in-principle agreement for an enterprise bargaining agreement in August but the owners were “reneging” on that deal and had engaged a law firm to fight back.

Mr Cullinan said they struck a deal that included the reinstatement of pre-2017 Sunday penalty rates, six months’ parental leave, anti-bullying and harassment measures, procedures around the conversion of casual to permanent staff, and a pay rise from $22.33 to $24.22 an hour.

The retail award stipulates levels from one to eight based on experience and expertise, but without enterprise bargaining most retail staff at most companies are paid at entry level. Better Read employees want to be moved to level 3, with an extra $1 on top.

Better Read co-owner Terry Greer denied he had reneged on any agreement and said the full story would be aired at the Fair Work Commission, with the first mention set down for this Thursday.

“The entire collective bargaining process has resulted in a huge cost on a small business,” Mr Greer said. “This has not been assisted by the adverse media campaign that has been waged by the union, which is having a devastating effect on the business that is struggling to survive following the lockdowns.”

Mr Greer said Better Read than Dead had three full-time, two part-time and eight casual staff. Mr Cullinan said Better Read was a group of companies and he believed there were up to 20 in total.

The union is also representing a former employee, who was allegedly fired for his union organising efforts, and this will be heard in the Federal Circuit Court next year.