Macquarie Group chief executive Shemara Wikramanayake says Australia’s economic recovery from the COVID-19 crisis is world-beating despite the slow vaccine rollout, and she hopes international borders can re-open next year.

In the latest upbeat view on the economy from a banking boss, Ms Wikramanayake said the world’s economic recovery was making good progress, and she tipped rapid growth over 2021. 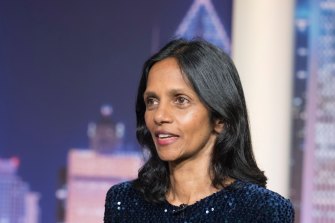 “Despite the ongoing risks the Australian economic recovery continues to lead the world, with medical success allowing the government to re-open much of the economy”: Macquarie Group chief executive Shemara WikramanayakeCredit:Lisa Thompson.

“Following one of the largest economic shocks since the 1930s, the global economic recovery is now well underway, with GDP likely to expand by a rapid 5.5 per cent over the course of this year. In general the countries that have controlled the virus the best have seen the strongest recoveries, with China and Australia outperforming over last year,” Ms Wikramanayake said in an opening address to the annual Macquarie Australia Conference.

“The US is likely to lead the way in 2021 as fiscal stimulus and the rapid vaccine rollout allow economic re-opening, but Australia is still expecting to this year outperform most other economies.”

Speaking to institutional investors from around the region, Ms Wikramanayake highlighted Australia’s success in containing the virus. She said the experience of countries with higher vaccination rates pointed to further opening-up of economic activity this year, and the eventual re-opening of international borders.

“Despite the ongoing risks the Australian economic recovery continues to lead the world, with medical success allowing the government to re-open much of the economy,” she said.

“While our vaccine rollout has started slowly, very low rates of COVID infection have allowed much of the economy to return toward normal. As the program picks up pace, the success of the mass inoculation programs in places like Israel suggests that we will be able to further normalise as the year progresses and eventually re-open our borders so that some of you can join us here next year in person,” she said, speaking via a webcast.

However, she said there was a growing divergence in the health and economic outcomes being experienced in different nations, as many emerging countries suffered sharp rises in COVID-19 cases.

Macquarie will deliver its annual results on Friday, with markets expecting a profit of about $2.95 billion, close to its highest ever. The bank’s share price has doubled from its lows of last year, and was trading at $160.50 on Tuesday morning. National Australia Bank and ANZ Bank will also report their profits this week, with markets expecting a significant rise in dividends.

“It’s been eye-opening to witness how we can continue to get the job done and indeed make permanent shifts that lead to better outcomes,” she said.

Macquarie is one of the world’s biggest players in infrastructure financing, including in renewable energy, and Ms Wikramanayake welcomed the recent signs of increased global momentum towards cutting carbon emissions.

“Climate change is one of the most complex and critical challenges facing the world and it’s heartening to see the material increase in concrete initiatives from countries and companies in the lead-up to the UN’s climate change conference in Glasgow in November,” she said.