Home » Markets » ‘At a crossroads’: Calls for biotech investment rethink

"I think our nation is at a crossroads now… to actually become an innovative country we need a mindset change, and investors have to move away from bricks and cars and minerals: their lifespans are finite," Dr George Syrmalis says. 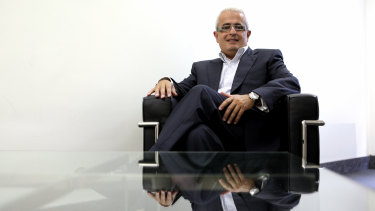 The IQ Group Global founder George Syrmalis says Australian policymakers need to give better details on what it means to become an innovative nation. Credit:AFR.

Over the past nine years, Syrmalis has been harnessing funds from high-net-worth individuals to invest in the development of projects for catering to unmet medical needs.

The iQ Group Global now includes a portfolio of listed and unlisted companies including ASX-listed life sciences consultancy iQ3 and wholesale investor funds, like the $100 million Series 8 fund, which is now closed off to new investors.

Dr Syrmalis' 250-strong global team canvasses about 1,000 potential company deals before it chooses to work with a biotech company, with the aim of getting it to clinical trials stage and then potentially helping the business list on the stock exchange as it continues its path towards commercialisation.

The Sydney-based firm has been casting the net globally: a recent intellectual property acquisition was from the University of Texas, where a team is working on a new ovarian cancer drug.

The OxaliTEX drug is being developed through OncoTEX. Vice-president of research Jonathan Arambula says the product is designed to target tumours more directly and overcome some of the resistances that diseases like ovarian cancer tend to build up, often because they are detected late.

Dr Arambula says the acquisition of the technology by iQ Group Global, which was completed last year for an undisclosed amount, will support his research team through to clinical trial stages.

The potential impact of these new drugs is significantly but Dr Arambula concedes significant time and capital is needed for the long road towards making the drugs available to patients.

A drug like OxaliTEX is still years away from hitting the first proper stages of a commercialisation process.

"Early stage technologies are very different because there is some good quality data there but they’re a little bit more high risk.

"They have the potential to make a profound impact at a later stage, it’s just that from an investment perspective, there are more risks involved," Dr Arambula says.

It's why Dr Syrmalis believes the conversation about health tech invention needs to be repositioned in Australia, where investors are often interested in much faster returns. Despite having brought a number of businesses into its portfolio, close to a decade in the group has not yet fully exited a position, citing an investment horizon for these types of companies of up to 12 years.

"Conventional commercial wisdom shies away from these sorts of investments," he says.

At a national level, he expresses disappointment that despite the government saying innovation will secure future growth for Australia, policymakers are too vague about how we get there.

"Innovation requires brutal realism and optimism at the same time. Policymakers articulate things at a top line, but fail to tell us how we're going to do it."

He echoes calls from other researcher founders that there needs to be a faster way of spinning out Australian research into standalone companies. While this process can take weeks or months in the United States, it can take multiple years to complete such transactions in Australia.

"I think they should cut through the bureaucracy," he says.

Minister for Industry, Science and Technology Karen Andrews says it is not fair to say the government isn't prioritising investment in the space, citing funding and investment in the national growth centre for medtech, MTPConnect.

"From the $500 million Biomedical Translation Fund through to the $32 million we’ve invested in MTPConnect, which is part of the Industry Growth Centres Initiative, I don’t think anyone could reasonably suggest we’re not doing enough to support innovation in biotech," she says.