ANZ Bank on Monday announced it will raise about $3.5 billion in new equity to help fund the all-cash purchase of Suncorp’s banking arm for $4.9 billion. The deal would allow the big four lender to further expand into the retail banking market, as well as into Queensland. 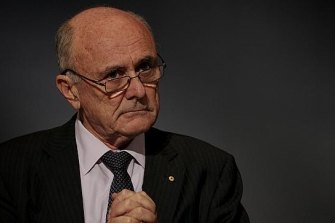 Professor Allan Fels, the former chair of the ACCC, said the regulator’s scrutiny of the deal to merge ANZ with Suncorp’s bank would be an important test for the new chair. Credit:Alex Ellinghausen

However, the deal, which would see Suncorp’s banking arm continue to operate under its current brand for five years, faces several regulatory hurdles before it is approved.

This includes approval from federal Treasurer Jim Chalmers, the Australian Competition and Consumer Commission (ACCC), and it will require amendments to Queensland legislation, which currently requires Suncorp’s head office and senior executives to be located in Queensland.

The ACCC, led by competition lawyer Gina Cass-Gottlieb, said on Monday it will consider the competitive impact and any public benefits of the proposed transaction on relevant banking markets and consumers, including Suncorp’s role as an effective competitor and challenger to the major banks in Queensland.

Fels, the chair of the ACCC from 1995 and 2003, said on Tuesday it wouldn’t be a simple decision for the new chair.

“I don’t know which way they’ll jump, it’s an interesting test for Gina Cass-Gottlieb,” he said.

While he was neutral about the deal, he said the commission will likely focus on two markets: the market for small business lending and on some parts of consumer markets including housing.

“An issue is whether the four banks compete strongly against one another these days with the result that the removal of a fifth player may not make much difference. But the traditional view is that an extra regional bank has made considerable difference to competition,” he said.

“As an objective decision maker, it’s not a simple decision. From a public point of view, they may form the oversimplified view that she’s pro or anti-bank depending on the decision.”

ANZ chief executive Shayne Elliott said on Monday he was confident they would get a “fair hearing” by the regulator.

“As the smaller of the major banks, we believe a stronger ANZ here in this state in particular will actually increase competition and drive better outcomes for consumers,” he said.

Meanwhile, analysts on Tuesday delivered their verdicts on the proposed deal, as Suncorp shares retreated following big gains on Monday, falling 5 per cent to close at $11.19.

Citi’s Brendan Sproules said ANZ was paying a “reasonable” price of $4.9 billion for the Queensland bank, and it could deliver value for ANZ over the long term.

However, he added the estimated $680 million in integration costs were surprisingly high, partly because of ANZ’s plan to run Suncorp independently for three years before merging it with ANZ’s other operations.

Morgan Stanley analysts said the strategic rationale and financial implications of the acquisition were “not compelling”.

“At first glance, we don’t think the acquisition materially enhances ANZ’s franchise and it will only marginally change the business mix, although it materially increases exposure to QLD”.

A number of factors created uncertainty for investors, they said, including competition and regulatory scrutiny.

JP Morgan analyst Andrew Triggs also said the optics of the acquisition were “by no means perfect”, in part because the deal stills needs regulatory approval.

However, he said there was some strategic merit to the deal, as it would help to reshape ANZ by increased exposure in Queensland, improved deposit franchise and reduced institutional exposure.

“In ANZ’s view, the deal will increase its ability to compete with [CBA and Westpac], which will improve competition,” he said. “It is not clear whether the ACCC will assess the transaction predominantly from a national or state market perspective. ANZ has the smallest home loan book of the majors in Queensland.”