AMP has revealed US investment firm Ares has withdrawn its takeover proposal for the wealth giant.

AMP made the announcement as it released its full-year results on Thursday, reporting sliding assets under management and that it will not pay shareholders a final dividend. The company included an update on its portfolio review launched in September after the company received unsolicited bids for its assets. 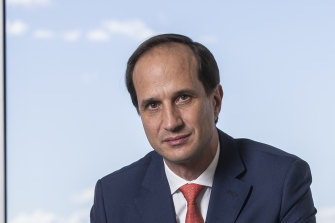 Ares had offered to buy 100 per cent of AMP’s shares for $1.85 per share in October which sent the stock soaring by almost 20 per cent but after conducting due diligence, the firm has now withdrawn its offer.

AMP said negotiations with Ares were ongoing, adding it was possible to carve out the company’s most lucrative asset, AMP Capital, as part of a new deal.

AMP reported its statutory profit for the year was $177 million, which reversed the $2.5 billion loss from the previous year after its bruised reputation from the banking royal commission saw clients abandon the company en masse.

Despite the stronger headline figure, AMP’s assets under management fell by 8 per cent in its wealth management business and 7 per cent in AMP Capital, “reflecting volatile investment markets and net cash outflows”.

Shareholders will not receive a final dividend, after a special yield of 10 cents per share was paid in the December half but AMP added the board was committed to restarting dividends this year, “subject to the completion of the portfolio review, market conditions and business performance”.

AMP’s board has also pulled its wealth management and bank businesses, AMP Australia and AMP Bank, from the sale process and will now return to focusing on chief executive Francesco De Ferrari’s three-year transformation strategy.

“AMP continues to review options for maximising the ability to grow and invest in AMP Capital including exploring partnership options,” the company said.

“The board will provide an update on the outcome of ongoing discussions as soon as possible.”

The outflows were partly caused by $1.8 billion being withdrawn under the federal government’s emergency scheme that allowed Australians affected by the pandemic to cash-out retirement savings.

The volatility caused by COVID-19 also contributed to profits falling across most arms of AMP’s business, including AMP wealth management (44 per cent), AMP Bank (16 per cent) and AMP Capital (32 per cent).

Mr De Ferrari said 2020 was a tough year around the world, with COVID-19 unsettling clients, workplaces and the broader community.

“Within our business, it was also an extraordinary year, with significant internal change and the initiation of a portfolio review in 2H 20,” he said.

“Amid all these events, I couldn’t be more proud of our teams who, working remotely, maintained a relentless focus on the execution of our strategic agenda.

“Underpinning our strategy, we have also accelerated our cultural transformation and are determined to drive a culture of inclusion, accountability and high performance.”

What to watch today: Nasdaq set for sharp drop after Friday's comeback