AMP chief executive Francesco De Ferrari has dodged questions on whether the wealth giant has a cultural problem around issues of sexual harassment as pressure mounts for clarity surrounding the sudden departure of one of its most senior employees. 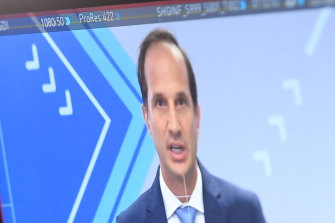 AMP chief executive Francesco De Ferrari spoke about the importance of corporate accountability but refused to explain why a senior employee had left the company as the group unveiled its results on Thursday.Credit:Peter Braig

Mr De Ferrari faced a long list of media questions after allegations were aired that Mr Wade was forced to resign as a result of misconduct, including sending inappropriate photographs to female employees.

"This is not me trying to evade the question. I am trying to run a business that delivers for clients and for shareholders," Mr De Ferrari said.

The resignation came the month after it was revealed the newly appointed AMP Capital chief Boe Pahari had been promoted despite being accused of sexually harassing a colleague. Mr Pahari was fined $500,000, or 25 per cent of his annual bonus, for breaching company policy, and the woman left the company.

"We’ve commented on the employment incident," Mr De Ferrari said. "We looked at all the different elements and became satisfied this was a one-off event."

When asked if this promotion sent the wrong message to AMP employees, Mr De Ferrari refused to answer and declined to be drawn on whether recent events signalled the company had a culture that discriminates against women.

"I am not commenting on speculation in the media. What I can tell you is that culture has always been one of our top priorities. Given the recent events, I have now made it my number one priority," he said.

AMP has set up an employee-led "inclusion taskforce" and a board-led culture working group in response to the reputational crisis. Mr De Ferrari said he had been present at two meetings so far, but added "there is a lot of work to do".

Mr De Ferrari was appointed as CEO in December 2018, tasked with cleaning up the image of an institution that had been exposed as one of the worst performers during the banking royal commission.

"In reading some of the headlines when I joined, [it] was called the most challenging transformation in corporate Australia," Mr De Ferrari said. "That does not happen over night. I have been acutely aware from day one. Believe me, I feel the responsibility on my shoulders and I'm driving this very hard."

"The longer this drags on, regardless of whether you believe these people are doing a good job, the perception is that they’re not," Mr Carlisle said. "In financial services, perception matters and drives real outcomes."

Two of AMP's eight board members are women and Mr De Ferrari said this needed to improve. "We absolutely recognise we need to do better at gender diversity. There are lots of other elements of diversity and we are very committed to this. Our targets are for 40/40/20 and we are working to comply with those targets."