The chief executive of AMP Australia Alex Wade has stepped down after less than a year in the role as the company battles a number of scandals and prepares to report its full-year earnings.

The wealth giant informed the market on Thursday morning Mr Wade would leave the company effective immediately, without explaining the circumstances around his departure. He will be replaced by Blair Vernon, chief executive of AMP's New Zealand wealth management business. 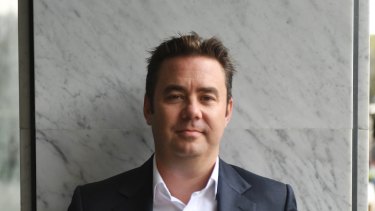 AMP chief executive Francesco De Ferrari said he was pleased to call on Mr Vernon to lead the team until a replacement for Mr Wade is found.

"We have a strong team in AMP Australia, who have been transforming the business, managing the successful separation of AMP Life, reshaping advice and increasing our focus on clients," Mr De Ferrari said in a statement.

Mr Wade had been at the wealth giant for under two years, having joined in January 2019 after 12 years in various roles at Credit Suisse – the finance powerhouse Mr De Ferrari had also worked at for 17 years.

AMP Australia was created in October 2019 after the 170-year-old company merged its wealth management and bank businesses as part of a strategy to simplify the company. Mr Wade was promoted to run the merged business after serving as group executive overseeing AMP's adviser network.

Speaking at an online forum in June, Mr Wade spoke of his commitment to the company.

"I have a personal connection with AMP. Full disclosure, my great-great grandfather was a vice patron when it was founded 170 years ago. So I’m very connected to this company and I see the difference that this company makes in [the] lives of people on a daily basis," he said.

"We have been part of many milestones in this country … I feel very deeply, that's my responsibility and my team's responsibility to honour that and continue to do that and rebuild this icon in the country."

The executive shake-up comes the day after the Australian Securities and Investments Commission deputy chairman Daniel Crennan told a federal government committee AMP would be served with legal action by the end of the year, and that the market regulator was running at least five active investigations into misconduct.

AMP has faced a fresh list of scandals this year as it battles four class actions and was forced to defend the appointment of money manager Boe Pahari to head AMP Capital after he was fined $500,000 for sexually harassing an employee.

Federal MPs have called on the government to investigate whether changes to AMP's long-standing financial arrangements with current and former aligned advisers could have broken the law after hundreds claim they were plunged into ruin.

"I believe the retrospective nature of it and the way they’re dealing with advisers is unconscionable," Coalition MP and chief government whip Bert van Manen said. "[AMP] need to honour the contracts they’ve signed."

AMP will report its full-year results next Thursday. It has already flagged profits are set to halve compared to the same period a year ago, due to coronavirus-induced market volatility and economic disruption.