The ASX-listed advertising startup founded by Sargon Capital chief executive Phillip Kingston is still working with receivers and administrators of Sargon entities to see if it can recover outstanding bills of up to $1.8 million.

Trimantium GrowthOps is a network of advertising, marketing and coaching brands which Mr Kingston listed on the Australian Securities Exchange with an issue price of $1 a share in 2018. 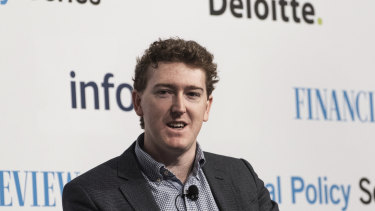 Sargon Capital has faced uncertainties over recent weeks after receivers and administrators were appointed to a range of non-operating holding companies related to the superannuation software provider.

Two weeks ago, Mr Kingston announced he was stepping down from his role as non-executive director of GrowthOps having overseen the transition of a new board and management team installed last October.

GrowthOps later posted a further update to investors confirming that Sargon Capital companies had been clients of GrowthOps and "that the aggregate amount owing to the company by
these various Sargon entities is less than $1.8 million". It said it would assess whether those amounts were recoverable.

The GrowthOps share price has had a bumpy start to 2020, sitting at 19c on January 21 but down to 9.9c on Tuesday afternoon.

GrowthOps includes a range of advertising, coaching and branding imprints. It has had a number of leadership changes over the past year: last October, the majority of its directors and its chief executive Paul Mansfield exited the company. Clint Cooper was appointed the new chief executive, while former Victorian government small business minister Philip Dalidakis was among the new board appointees.

Mr Kingston is no longer involved in the business as a non-executive director but owns more than 25 million shares in GrowthOps through companies he is associated with, according to his final director's interest notice.

GrowthOps chief financial officer Craig McMenamin said the company did not comment on share price movements and was adhering to its continous disclosure obligations.

"The company is in the process of determining whether any or all of the amounts outlined in our statement to the ASX on 5 February are recoverable, and continue to work with the appointed receivers and administrators," he said.

The company will report financial results for the six months to December 31 in the last week of February, when it may provide an update on whether it can recover money owing from Sargon-related companies.

GrowthOps is not the only business yet to provide a final update on recovering payments from Sargon entities. Superannuation platform provider OneVue, which sold its Diversa Trustee business to Sargon last year but is still awaiting final payment, has been in the process of working with receivers on the issue. OneVue reports interim financial results on February 26.

OneVue has already had receivers take control of Sargon's stake in Sequoia Financial Group as well as the business Madison Financial Group in an effort to recover some of the $31 million payment still owing.

Administrators at EY responsible for Sargon Capital entities were contacted for comment but did not respond to requests prior to publication.

Mr Kingston and Sargon Capital were contacted for comment but did not respond.