More than $31 billion of Commonwealth Bank home loans are in areas exposed to increasing extreme weather events and another $14 billion in mortgages are in communities economically reliant on demand for coal, climate analysis has found.

A CBA climate risk assessment of its home loan portfolio found about 38,000 properties, with mortgages equalling $11 billion, have been assessed as having a high risk of exposure to cyclones, while 56,000 properties ($19 billion) are at risk of floods and 5000 ($2 billion) at risk of fire. 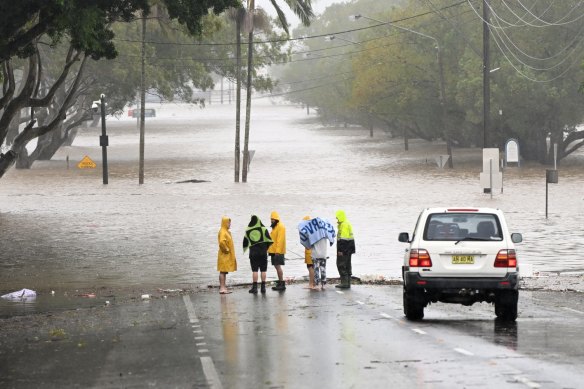 The report found that over $30 billion in mortgages were exposed to increased physical risk due to climate factors.Credit:Getty

The analysis was part of the bank’s first climate report, which included an assessment of how the physical and transition risks of climate change could affect parts of its business based on financial projections to 2050.

The bank’s research found about $31.2 billion in home loans werein areas “exposed to increasing risk such as cyclone-exposed coastal regions, low-lying flood plains and rural areas in close proximity to the urban fringe”.

“In particular, peril risk ratings reveal increases in cyclone, flood and fire risk by 2050,” it said.

The report said studies have shown that cyclones would continue to form further south and had the potential to hit populated areas previously not exposed to cyclone risk.

“If this happened in the north of NSW, where construction standards have not been designed to resist cyclones, material losses could be observed which are not currently reflected in our current estimates.”

The research considered the possibility that customers lacked adequate insurance, and also assessed loan-to-value ratios (LVR), the ratio between the value of the loan and the value of the underlying property. Higher ratios are more risky for lenders as they are less likely to recoup their money if the borrower defaults and the house is sold.

CBA is the country’s largest home lender, holding $556 billion in mortgages in Australia. While the number of mortgages assessed as high risk due to climate factors was only a fraction of its overall home-loan portfolio, about two-thirds of major bank lending is for residential mortgages, making any change in housing values a risk.

The bank also looked at ABS employment data and locations of mines and ports, and analysed the potential timing and scale of changes of Australian coal export demand to estimate the probable impact to economic activity and employment opportunities in areas reliant on the coal value chain.

The report said communities with workforces highly concentrated in fossil fuel-related industries were likely to be significantly impacted under varying Paris-aligned scenarios.

“The concentration of a local area to the fossil fuel value chain increases the risk that indirect employment and broader economic value, including residential property values in these regions, is reduced as a result of a significant reduction in global coal demand,” the report said.

There was a range of uncertainties when undertaking climate scenario analysis, the bank noted, adding that CBA was still in the early stages of developing the approach and more was needed to improve granularity and accuracy.

The Reserve Bank has previously warned that property in parts of Australia exposed to climate change and wild weather could experience valuation declines that left banks with less protection in the event of a default.

About 3.5 per cent of dwellings in Australia fall under an international definition of being at “high risk” from climate damage, RBA economists said in a research paper.

But they note it’s the rise in climate risk not yet reflected in property prices that is key when considering banks’ exposures in climate-sensitive regions.

A CBA spokesman said a key part of their approach was to provide more quality data to help with the transition to net zero. The bank is partnering with the CSIRO to produce emissions transition scenarios for the residential sector, which they intend to make publicly available.

The Australian Prudential Regulation Authority is working with the nation’s largest banks to identify their potential vulnerability to climate change amid growing global recognition of the risks it poses to the entire financial system. The findings of APRA’s Climate Vulnerability Assessment are expected this year.

“Notwithstanding the efforts to decarbonise the economy, the climate has already changed and will continue to warm for decades to come,” he said. “It is therefore also essential, for financial institutions and businesses, to build resilience into their operations and understand how they will need to adapt their operations for a warmer and more volatile climate.”

Adrian King, head of climate change and sustainability services at KPMG, said their research had found that while Australian banks had been leading for many years when it came to disclosing climate risks, the pace had slowed in recent years when compared with international competitors.

“The pace of change is so fast in this area,” he said. “They used to be ahead of the pack, but unless they are moving at an extraordinarily fast pace, they are probably going to fall behind international peers at some point.”

He said there had been good progress in recent months, with all four big banks joining the UN’s Net-Zero Banking Alliance, which provides a logical and clear pathway to doing these calculations.