More than 10,000 Australian academics and university employees have signed a petition asking $85 billion superannuation fund Unisuper to divest from companies they say are incompatible with the Paris climate agreement. 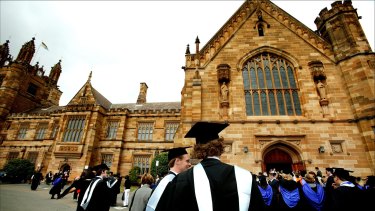 More than 10,000 university professionals have signed a petition asking Unisuper to divest from the fossil fuel industry. Credit:Louise Kennerley

It is also the fund of choice for most major regional universities, including the Australian National University, Charles Sturt University and the University of Wollongong.

The industry fund was one of five revealed to have billions invested in the global fossil fuel industry, alongside HESTA, Cbus, AustralianSuper and Hostplus. Unisuper's records show it has almost $8 billion invested in 14 thermal coal mines and 13 oil and gas companies. The fund previously stated it had no plans to divest from these assets.

Signatures on the online petition, started by activist group Market Forces, include executive director of ANU's Climate Change Institute Will Steffen, CSIRO scientist Professor David Karoly and the director of research training at ANU, Professor Inger Mewburn, alongside academics from universities in every state of the country.

"Clearly we must transition out of coal, oil and gas as quickly as possible to have any chance at all to stable the climate to a safe level," Professor Hughes said. "Universities are thought leaders in the community and should be at the forefront of strategies and thinking to promote climate change action."

Bioethics and Melbourne Laureate Professor Peter Singer also signed the petition, saying he was not confident the strategy of engagement was effective and criticised the argument that the sector has solely a fiduciary responsibility.

"Superannuation is by its nature a long-term project," Professor Singer said. "I would have thought the industry has a particular responsibility to look at that future and say are we contributing to making life better for the members at the time where they will be drawing on the fund?"

ANU research fellow Dr John Cox said there had been a "groundswell" of support among academics across the country, with some demanding meetings within the upper ranks of institutions to put forward their case. "There is certainly a lot of anger about the greenwash coming from Unisuper," Dr Cox said.

On Wednesday, scores of ANU lecturers and students will protest at the Universities Australia conference in Canberra. Market Forces is bankrolling a full-page ad in The Australian Financial Review to draw attention to its campaign.

In a statement, Universities Australia chief executive Catriona Jackson said the union had no control over Unisuper's investment decisions. "It is bound by legal requirements and other considerations such as the views of all of its members … A number of Australian universities have decided to disinvest from fossil fuels in respect of their own investments."

Unisuper declined to comment on the petition or its investment strategy.