The numbers: The number of Americans who applied for unemployment benefits rose slightly in mid-February, but the rate of layoffs in the U.S. economy is still extremely and shows no sign of rising.

Initial jobless claims edged up by 4,000 to 210,000 in the seven days ended Feb. 15, the government said Thursday. The figures are seasonally adjusted.

Economists polled by MarketWatch had forecast a 210,000 reading. 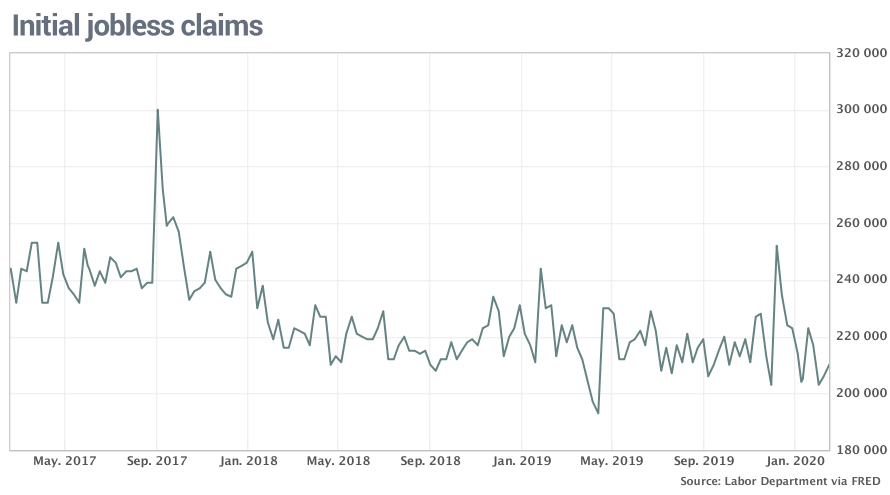 The more stable monthly average of jobless claims, which filters out the weekly ups and downs, slipped by 3,250 to 209,000. That’s the lowest level since last April.

New applications for unemployment benefits give a sense of how many people are losing their jobs. They touched a 50-year low of 193,000 in April 2019 and have hovered in the low 200,000s since then.

The number of people already collecting unemployment benefits, meanwhile, rose by 25,000 to 1.73 million. These claims soared to as high as 6.6 million near the end of the 2007-2009 recession.

Big picture: The U.S. isn’t producing as many new jobs as it did a few years ago, but that’s to be expected in an economy that’s been expanding for a record 10 and a half years. A decade of strong hiring has reduced the unemployment rate to the lowest level in nearly 50 years and made it harder for companies to fill open jobs. More recently slower economic growth has also caused hiring to slip.

Still, the strong labor market has made Americans feel more secure in their jobs and continue to spend at a healthy rate. That’s keeping the economy on a stable growth path and warding off the prospects of recession.

Market reaction: The Dow Jones Industrial Average DJIA, +0.40% and S&P 500 SPX, +0.47% were set to open lower in Thursday trades amid lingering worries over the spread of COVID-19, the disease linked to a novel coronavirus in China.