Home » Economy » Turning the screw: Europe and Russia are both losing the financial war

If Vladimir Putin had any doubts over who his friends and foes are, he just needed to scan the room at Russia’s annual business summit in St Petersburg last week. 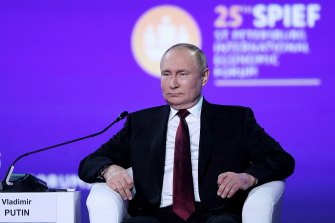 But it was down to a roster of oligarchs, Russian ministers and Xi Jinping, China’s president, to fill the programme for this year’s more subdued affair as Western delegates boycotted en masse.

In a defiant keynote address delayed by hackers, Putin claimed the “economic blitzkrieg” of sanctions has backfired on the West and were “more harmful” to Europe’s economies than Russia’s.

“The weaponry of sanctions is a double-edged sword,” he said, claiming that “gloomy predictions about the Russian economy’s future didn’t come true”.

As Russian businesses stare down the barrel of a huge two-year recession, many delegates last week would have raised eyebrows at Putin’s upbeat assessment – privately, at least. But economists believe the Russian president could at least be proved correct about the “double-edged sword” of sanctions for Europe’s stalling economy as energy supplies are disrupted.

Europe has finally committed to phasing out Russian oil imports, but Moscow is also turning the screw and economists are warning the next phase of the financial war will be more painful for Europe.

Fears are growing that as the war drags on, Europe’s economy will be pushed into a prolonged stagnation as energy supplies are squeezed.

Last week Russian state energy giant Gazprom slashed gas exports to Germany and Italy, the country’s biggest European buyers, including a 60 per cent reduction through the key Nord Stream 1 pipeline. Other countries, including Austria, have also reported disruption to deliveries. 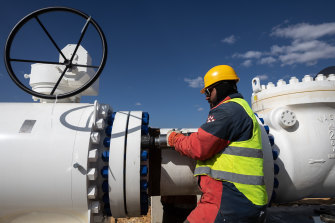 Gas prices in Europe jumped more than 40 per cent last week after the Russian supply cuts stoked fears of a sudden halt. Russia supplied 43 per cent of Europe’s gas in 2020 and has been dangling the threat of turning the tap since the war.Credit:Bloomberg

On Sunday, Robert Habeck, the German economy minister, warned that his country’s energy situation is going to be “really tight in winter” after the “political” decision by Gazprom. He also announced plans to reopen mothballed coal power plants and warned the public to stem consumption, to preserve gas supplies for the winter. It comes amid fears that a sudden reduction from Russia will trigger power rationing and tip Europe’s largest economy into recession.

The crisis is ramping up the risk of prolonged inflationary pressures and at least a technical recession – two consecutive quarters of a negative growth rate.

Inflation hit more than 8 per cent in May, compared with a year earlier, as energy prices surged. A renewed rally means economists are raising their forecasts.

Gas prices in Europe jumped more than 40 per cent last week after the Russian supply cuts stoked fears of a sudden halt. Russia supplied 43 per cent of Europe’s gas in 2020 and has been dangling the threat of turning the tap since the war.

HSBC economist Fabio Balboni, warns: “The recent surge in gas prices due to lower supplies from Russia, if sustained, could add to energy price pressures further out as the pass through takes longer. Inflation is clearly broadening out. The war in Ukraine seems likely to keep food prices high for a long period.”

“We are looking into stagflation. Inflation is going to take a long while to come down substantially,” he says.

He warns a “full stop to Russian gas supply would be an outright recession” and, if so, governments would likely step in with support to stop unemployment rising.

Earlier this month, the Bundesbank predicted “a considerably more subdued pace” to Germany’s recovery, but warned power rationing would cause a “pronounced decline” in economic activity next year.

However, despite Putin likely being correct about “double-edged” risks from Western sanctions, economists still think the region will easily outperform Russia.

Moscow is expected to suffer a huge plunge in GDP over the next two years, including the biggest annual contraction since the aftermath of the Soviet Union’s collapse.

Early economic data point to a 1.6 per cent slide in industrial production in April and a 10 per cent collapse in retail sales as Russian consumers panicked. 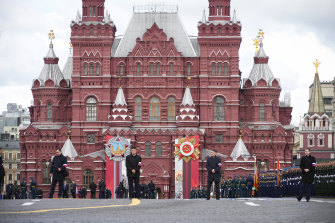 Moscow is expected to suffer a huge plunge in GDP over the next two years, including the biggest annual contraction since the aftermath of the Soviet Union’s collapse.Credit:AP

Output is set to shrink 10 per cent this year and a further 1.5 per cent in 2023 compared with growth in the eurozone’s “big four” economies over the next two years, an average of economists’ forecasts suggest. Inflation in Russia has also soared to 18 per cent, squeezing households just as unemployment pushes higher.

Nonetheless, there are some signs of Russia’s financial system stabilising following the initial onslaught from sanctions – and its economy adapting to restraints. Action by the Russian central bank, including capital controls, has stopped its financial system from collapsing while officials in Moscow are now fretting over the rouble being too strong.

Russia has also overtaken Saudi Arabia as China’s biggest oil provider as Beijing seeks to take advantage of the crisis by snapping up cheaper supplies.

Putin is keen to diversify energy exports by providing more to Asia after oil embargoes agreed by the US, Europe and UK threatened to create a black hole in the Kremlin’s finances. China’s crude imports from Russia jumped 55 per cent compared with a year earlier to about 2 million barrels per day, after Beijing ramped up purchases at a steep discount. Data from Beijing revealed that China bought $US7.5 billion ($10.8 billion) of Russian energy products – twice as much as a year ago.

While barrels of oil can be easily redirected, the network of gas pipelines cannot be shifted overnight to new customers away from Europe.

As Europe’s gas supplies are put under threat, few will emerge unscathed if the financial war escalates another notch.