Home » Economy » The weakness of Putin’s economic show of force

Vladimir Putin’s appearance at the St Petersburg economic forum, the Kremlin promised, would be an “extremely important” intervention. And it was. The Russian leader’s lengthy address, a rarity since the invasion of Ukraine, was a flame-throwing show of defiance and blame-shifting, a remarkable snapshot of a state of mind that leaves little hope for compromise. It was also a staggering display of weakness that even presidential bluster could not mask.

First, the context. Putin has avoided high-profile public speeches over the past four months, keeping his Victory Day speech brief and pushing back other mainstays of his calendar, like his televised “direct line” question and answer session, a multi-hour marathon that is a crucial part of Kremlin political theatre and efforts to burnish the president’s image as benevolent patriarch. So it matters that he went ahead with the flagship address at an investment gathering Russia has long touted as its answer to Davos, the elite Alpine get-together, thumbing his nose at the West. 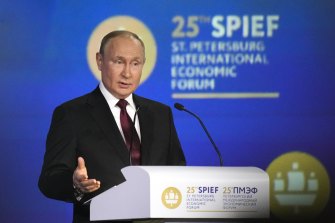 Yet it’s hard to escape reality. This year the forum (“New World, New Opportunities”) was not only low-key, it was deemed so toxic that attendees sought to keep personal details off participant badges. Asked about attendance, the Kremlin argued that foreign investors existed outside the US and Europe. Quite so, but the presence of representatives from Afghanistan’s Taliban leadership and Venezuela’s central bank hardly suggests a guest list overwhelmed with would-be investors waiting to plough money into the increasingly isolated economy. Perhaps it didn’t help that attendees coming from overseas were told to bring cash because of restrictions on foreign bank cards.

Chinese leader Xi Jinping and Egyptian President Abdel-Fattah El-Sisi, the most high-profile government speakers from outside the former Soviet states, addressed the forum too — with video messages. Necessary, perhaps, but an unhelpful contrast with in-person visits to Kyiv from the French, Italian, German and Romanian leaders, with Britain’s Prime Minister Boris Johnson turning up the next day. Ukraine was also recommended for EU candidate status, an early step in the long road to accession, but a timely show of support.

Then there’s Putin’s speech itself. In some respects, this rambling, hyped address was a compilation of greatest hits. The US sees itself as “the Lord’s envoy on Earth”, imposing its views on ethics, culture and history, while Brussels dances to Washington’s tune. Russia was forced into its “special military operation” by the West’s failures to abide by security guarantees. “Crazy” sanctions are hurting allied nations far more than Russia (“a double-edged sword”) and departing companies will inevitably return. Inflation, meanwhile, is all down to Western actions, their “money-printing machines.” There was room for talk of Russophobia, calls for larger Russian families, detours into the weakness of Western society, a sprinkling of flattery for China and promises of help for the emerging world.

There was certainly plenty of belligerence and no hint of a willingness to seek the diplomatic “off-ramps” some in the West have proposed to end the war in Ukraine. “All the tasks of the special military operation will certainly be solved,” he said, without detailing what exactly those tasks might be. And yet this was a speech to an economic audience, intended to advertise potential. There, no rhetoric — much less panels on “new opportunities”, skirting around the war altogether — could paper over gaps.

Russia’s competent macroeconomic management has helped contain the financial fallout from sanctions, stabilising the banking system and underpinning the currency. But the real economy — never mind long-term growth and the process of turning Russia into an attractive destination — is another matter entirely, and Putin’s speech laid out every problem. Self-reliance may be necessary, but it’s not a recipe for competitiveness or expansion. Promises that the government would bet on openness (“Russia will never follow the path of self-isolation”), private enterprise, social justice, infrastructure and innovation are not “principles” in Putin’s Russia, as he argued. They are pipe dreams in a country where state enterprises crowd out others, government paranoia weighs on research and spending lags, innovation is a struggle and educational standards are being undermined. The brain drain underway since Putin’s return to the presidency in 2014 has only accelerated, while his vision of a haven for tourism seems, unfortunately for Russia’s beauty spots, far-fetched at best.

Russia is not short of revenue, thanks to continued hydrocarbon exports. But for private enterprise — which both he and central bank governor Elvira Nabiullina separately correctly suggested would be crucial — the trouble has always been the heavy hand of the state, and that’s not changing with proposals to scrap most audits, nor will innovation benefit from artificial demand created by the state. Few will be reassured by the idea “each private initiative aimed at the benefit of Russia should receive maximum support and space for implementation”.

Putin talked up truckmaker Kamaz PSJC as an example of where domestic producers have stepped up to provide parts — but the automotive industry, choked by supply chain failures, is actually an example of just the sort of backward technological slide Russia should be wary of, as the country lowers safety rules to get around missing components and build basic domestic production, with the human capital loss that entails.

“It is much better at home,” the president told his audience, calling on oligarchs frozen out by the West to invest their money back in Russia. Some may well comply. But it won’t be Putin’s vision of self-reliance that lures them.