Home » Economy » The US election will change the world, regardless of who wins

The outcome of the US election has profound consequences for the rest of the world, and America’s relationship with it.

Do we get another four years of the Trump administration’s "America First" isolationism and protectionism and its transaction-driven approach to global issues – or does the US return to something closer to the role it has played for most of the past 70 or so years as the leader of a liberal international order? 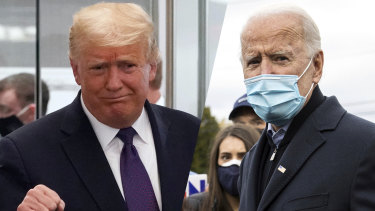 An extension of the Trump presidency will inevitably see an emboldened Donald Trump and a more insular America, doubling down on its view of globalisation and international relationships as zero sum games, with an overly-benevolent America inevitably losing to unscrupulous and cheating allies and rivals.

The withdrawal from multilateralism and multilateralist institutions – the World Trade Organisation, the World Health Organisation, UNESCO, NATO, international agreements on climate change and economic co-operation — will continue, as will Trump’s trade wars and the escalation of the confrontation with China.

Having fired most of the supposed adults who initially peopled the administration, surrounded himself with family, ideologues and sycophants and gutted and politicised the vast professional bureaucracy of the US government, Trump will be unfettered, and the fissures his first term has created in the post-war order will probably be irreparable.

If Joe Biden wins, America’s approach to its relationships with the rest of the world and multilateralism will be familiar, but not the same as it was pre-Trump.

Biden is a self-described multilateralist and globalist but, with some help from Trump, the world and America’s relationship with it has changed and the Democrats themselves have changed since the Obama years.

America’s allies no longer have the same trust in it as they did before Trump with his tariffs on their exports and his abandonment of the post-war institutions America played such a significant role in creating and leading.

Will they have the same faith in America’s competence or in the strength of its democratic institutions, having seen the ineptitude and dysfunction of its response to the coronavirus, the vulnerability and distortions within its electoral processes and the deep and combustible divisions within its society?

What to expect from Biden

Nevertheless, a Biden administration could be expected to restore its relationship with the World Health Organisation, unfreeze its $US400 million funding and attempt to create a co-ordinated global response to the pandemic and the development and global distribution of a vaccine. It won’t see a vaccine as a competitive advantage.

It will also recommit to the Paris Accord and, the US Senate willing, will pursue a leadership role in implementing a massive multi-trillion dollar response to climate change.

Where Trump has emasculated the World Trade Organisation Biden could be expected to try to modernise it; where Trump has threatened to withdraw from NATO Biden will recommit to it; where Trump walked away from an international approach to Iran’s nuclear program Biden is likely to try to renegotiate one; Trump withdrew from the Trans-Pacific Partnership on trade but Biden will seek to re-enter it, or something akin to it.

Perhaps most importantly, a Biden administration is likely to have a more sophisticated and nuanced approach to China.

Trump had a simplistic and erroneous view of China at the onset of his administration. He saw China (and not just China) purely in terms of trade and through the lens of America’s trade deficit. He regards trade deficits as the outcomes of other countries taking advantage of America instead of a far more complex out-working of America’s savings, its standards of living and the role the US dollar plays in the international economy.

If Biden wins, some of the scars of this bizarre period in its history and the divisions and mistrust that has been sown at home and abroad will remain.

That was before the "hawks" in the administration seized the opportunity provided by the trade war to expand the conflict into a larger contest for economic and geopolitical supremacy.

Trump’s trade wars are crude and, for American companies and consumers, costly. They’ve also been ineffective.

While the trade deficit with China has shrunk, America’s overall deficit with the rest of the world has increased as companies, including China’s, have simply shifted production to other low-cost jurisdictions in Asia and South America.

The non-trade sanctions pursued by the hawks have been opportunistic and lacking a consistent philosophy or framework other than distrust.

No more 'them versus us'?

Biden is unlikely to remove the tariffs and sanctions on China – the Democrats have a strain of protectionism and are as wary and cynical of China’s ambitions as Republicans – but his long history in foreign relations says he will mix more sophisticated diplomacy with continued efforts to contain the Chinese challenge to America’s economic supremacy.

He’s also likely to be far more willing – and far more able – to try to co-opt America’s traditional allies to that effort.

Many of America’s traditional allies, including Australia, share the same concerns about China’s trade practices, geopolitical ambitions and the increasingly aggressive and repressive nature of its leadership.

Trump eschewed the opportunity to co-opt them to try to contain and influence China, even though an alliance of the Western economies would have been far more powerful than an "America Alone" approach to foreign affairs generally and China in particular.

Where Trump sees America’s relationship with the rest of the world as "them versus us" contest to see who can exploit the other more, with a deep demarcation between the domestic economy and its international interfaces, Biden sees it through a post-war lens where America benefits from a stable and prosperous world order.

A Biden administration would be more "normal" and competent, more influenced by science and expertise and more inclusive in its approach to both domestic and international affairs.

It would, however, have to deal with its own internal tensions between the centrists, like Biden, and the growing influence of the "progressives" within the Democratic party and Congress and would also confront the reality that the most urgent challenges – the pandemic, the economy, social divisions and tensions and inequality – lie at home and have been magnified greatly by the experiences of the past four years.

If Trump prevails against the odds it is improbable that the course of the past four years will be unwound. America will be forever different to what it once was and the fracturing of its traditional relationships with the rest of the world will be long-lasting, or even permanent.

If Biden wins, some of the scars of this bizarre period in its history and the divisions and mistrust that has been sown at home and abroad will remain.

America’s policies might become less erratic and aggressive, its decision-making more considered and collegiate and its view of the rest of the world less distrustful, but its former role as the undisputed leader of the liberal world order and as the leading protagonist for democracy and free trade will probably never be the same.