The year is 1985. Bob Hawke has stormed into the Lodge with a landslide victory in the 1984 election. On the radio, the British band Dire Straits dominates with its Brothers in Arms album and its hit song Money for Nothing extolling the benefits of being a lead guitarist: That ain't workin' that's the way you do it:/Money for nothin' and your chicks for free. The average Australian home price is somewhere between twice and three times the national average salary. 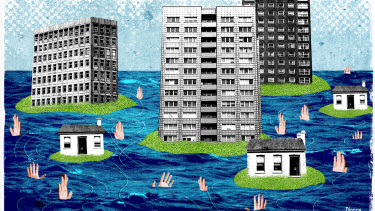 Sure, interest rates are about to hit the roof and recession is on its way, but for now, at least, the pathway to home ownership for young Aussies (a cohort who will one day face the disparaging epithet of “OK Boomer”) is relatively clear.

Fast-forward three decades. What seemed like an innocent enough and catchy radio tune has turned prophetic. Real wages have risen by about a half, but home values have tripled. It’s Australia 2020, and that’s the way you do it: money for nothing and it’s capital gains tax free.

Today, Australian home values are worth about seven times the average salary. In Melbourne, it’s eight times. In Sydney, it’s more than nine times. And that’s before the latest resurgence in home values.

It’s the untold back story to Australia’s recent economic success. Until now.

This week, three of Australia’s leading housing academics, Hal Pawson, Vivienne Milligan and Judith Yates, released a book,  Housing Policy in Australia: a case for system reform, which pulls together decades of research into what they see as a systematic failure of Australian policy when it comes to that most basic of human rights: shelter.

“Housing system reform is overdue and increasingly urgent,” they conclude.

While global factors, such as ultra-low interest rates, have pushed up home values globally, the deterioration in affordability has been even more pronounced in Australia, the authors find. Indeed, Australia has seen the worst decline in home affordability, as measured by home values as a multiple of incomes, of any major OECD country since 1985, according to their analysis.

Why? Far from being a symptom of our success, rising home values are a sign of supersized policy failure at the national level, they say.

While housing policies periodically get some time in the political sun – usually around elections – the last time Australia had a serious comprehensive national strategy to house its people was in the post-World War II era, when the federal government led the great push into the suburbs. Since then, reforms have been sporadic and often counterproductive.

The authors point to the obviously harmful impact of the capital gains concessions on investment property, which has inflated demand for housing while encouraging property to be viewed as a speculative vehicle for wealth accumulation rather than a fundamental need.

Meanwhile, rising home values have pushed more people into private rental accommodation, where tenant rights have not kept pace. Meanwhile, those on low incomes, squeezed out of private rentals, have encountered an overburdened and inadequate public housing system.

We are now at a crunch point, the authors argue, where in addition to the obvious inequality of Australia’s housing system, the manifest failure to ensure a path to home ownership will put increasing stress on the national budget as households that do not own their home require higher support payments in retirement to cover housing costs.

So, what to do about it?

“There is no responsible ‘business as usual’ option,” Hal Pawson told a Committee for Sydney event this week to launch the book. “A national housing strategy is long overdue and can only be led by the Commonwealth. It must be national because … it’s plain that key instruments of housing policy, especially tax and social security settings, are controlled by the Commonwealth and not the states.”

So what would a national housing strategy look like?

First, it would be overseen by a dedicated housing minister at cabinet level. Federally, Michael Sukkar is Australia’s current housing minister, but he’s not in cabinet and he juggles the role with the not insignificant responsibilities of being Assistant Treasurer.

Second, we need a dedicated national agency responsible for overseeing housing policy, such as the US Federal Housing and Urban Development department. To his credit, Prime Minister Scott Morrison promised at the last election to beef up the existing National Housing Finance and Investment Corporation with more research powers to the tune of $5 million a year, adding to its existing twin responsibilities to both oversee Morrison’s election announcement of a first home loan guarantee scheme and his announcement as Treasurer in the 2017 budget of funding to help the community housing sector gain access to cheap credit.

This rebuilding of an institutional capacity at the national level to deal with housing issues is an important first step. But there are plenty of others too.

Reform of tax breaks on housing, most pressingly on investment housing, must be on the table, the authors argue. As must a switch in the tax base of state governments from stamp duty to a land tax.

All renters need greater rights to long-term and stable leases.

And those pushed into the public housing system by increasing demand in the private rental market need quality housing that does not compound the disadvantage they already face.

In short, Australians deserve a national strategy to ensure access to stable and affordable housing – not just the politicians’ latest trick.