Most of the focus on Jerome Powell’s Jackson Hole speech last Friday has been on what it said about the prospect of a tapering of the US Federal Reserve Board’s asset purchases this year. There were, however, sections of the speech that canvassed more interesting questions.

In his address, the Fed’s chairman said that he has now joined the ranks of the members of the Open Market Committee who favour reducing, or “tapering” the rate of its $US120 billion ($164 billion) a month of bond and mortgages purchases – if the US economic recovery evolved “broadly as anticipated.” 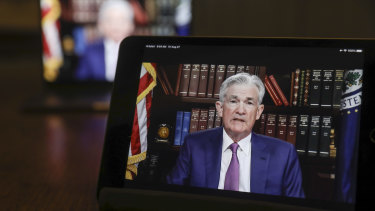 That’s a “maybe” rather than a commitment and one built, it was apparent from other elements of the speech, on an assumption that, post-recovery, the economy and its macro settings will look reasonably similar to those which pre-dated the emergence of COVID-19.

The pandemic ravaged the US (and other) economies, briefly.

Powell said it had displaced 30 million workers in the US and that the decline in economic output in the second quarter of last year was twice the full decline experienced during the “Great Recession” of 2007-09 that followed the global financial crisis.

The pace of the recovery, however, had exceeded expectations with output surpassing its previous peak after only four quarters, less than half the time it took to achieve that outcome after the 2007-2009 recession.

An unusual feature of the pandemic’s impact on economies has been the uneven distribution of its impacts.

There has been a boom in consumer spending on appliances, furniture, cars, IT-related goods and other household items but a collapse in spending on services like restaurants, travel, leisure and other services that require close contact with others.

That boom in consumer goods has driven US inflation to 30-year highs. Last Friday the Fed’s preferred measure of core inflation showed a 4.2 per cent increase in July, sustaining the run of inflation data this year at more than twice the level targeted by the Fed.

Despite that, Powell and the Fed more broadly are still holding on to their thesis that the spike in inflation is transitory.

There are some changes that the pandemic has wrought that may not be reversed, at least not in their entirety.

“The spike in inflation so far is largely the product of a relatively narrow group of goods that have been directly affected by the pandemic and the reopening of the economy,” he said. From long experience the Fed expected the inflationary effects to be transitory and “wash out over time.“

Later in the speech he outlined the historical basis for the Fed’s conviction.

Since the 1990s, he said, inflation in many advanced economies had run “somewhat” below two per cent even in good times. That pattern of low inflation likely reflected sustained disinflationary forces, including technology, globalisation and demographic factors as well as the successful commitment of central banks to maintaining price stability.

“While the underlying global disinflationary factors are likely to evolve over time, there is little reason to think that they have suddenly reversed or abated. It seems more likely that they will continue to weigh on inflation as the pandemic passes into history.“ 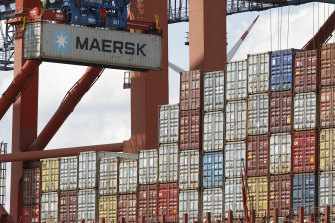 The shortages of semi-conductors and of container ships and containers that the dramatic shifts in consumption patterns have caused may not be resolved for years.Credit:Getty

There are several assumptions in that statement open to question, not the least of which is that the pandemic will pass into history anytime soon, or at least within the timeframes within which the Fed will have to decide whether to taper the asset purchases and low interest rates that are helping to keep short-term rates around the world near zero.

The more fundamental question is whether economies post-pandemic, whenever that might be, will simply return to pre-pandemic norms.

The prices of durable goods, as Powell noted, had been falling by almost two per cent a year in the decades leading up to the pandemic.

That was driven by the combination of globalisation, technology and demographics that Powell referred to but also owed much to the rise of China as the world’s low-cost manufacturing sector. China exported deflation to the rest of the world.

There are some changes that the pandemic has wrought that may not be reversed, at least not in their entirety.

The shock of the pandemic severely disrupted supply chains and exposed the rest of the world’s over-reliance on China for critical goods and on global supply chains.

With the continuing trade conflict and the increasing economic and geopolitical tensions and competition between the US and China, the prospect of “re-shoring” and “on-shoring” of production of goods has increasingly become more tangible.

The shortages of semi-conductors and of container ships and containers that the dramatic shifts in consumption patterns have caused aren’t going to resolved, according to the shipping industry, for years and in the meantime will continue to drive shipping costs up, adding to inflation and to the incentive to re-shore production.

With China no longer as low-cost a production centre as it once was; no longer as high-growth and economy as it was previously and with its economic strategies shifting away from a mercantilist model to being more focused on its domestic consumption, it may be less of a force for global deflation than in pre-pandemic times.

A presumption that life and inflation beyond the pandemic will simply return to their pre-pandemic settings therefore appears a somewhat unsophisticated assumption, given the structural changes that seem to be taking place within the global and domestic economies.