Sydney and Melbourne house prices surged in February with double-digit annual growth putting the capital cities on track to outstrip the peak of the 2017 property boom by the middle of the year.

Sydney house prices increased by 1.8 per cent in February while Melbourne jumped 1.3 per cent, CoreLogic data released on Monday shows. The surge has pushed Sydney's median house price back above $1 million. 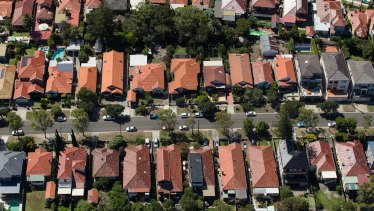 The booming price growth may be a complication for the Reserve Bank board ahead of its meeting on Tuesday, with pressure mounting for a rate cut to a record low to help counteract the impact of the coronavirus outbreak on the economy. Markets put the chance of a rate cut on Tuesday at 90 per cent.

Melbourne's housing values surpassed the September 2017 peak in January, with Sydney expected to reach a new record high by May if the growth trend continues. Both cities have now reported their ninth consecutive month of growth.

Brisbane, Canberra, Hobart and Adelaide have also reached record high property values. Brisbane house prices were up 0.6 per cent over the month to $551,766, with units up 0.3 per cent to $384,396.

CoreLogic head of research Tim Lawless said housing would be seen as one of the positive aspects of the economy when the RBA meets on Tuesday but would be a small topic of discussion compared to coronavirus.

"If we don't see a cut [in rates] tomorrow we will almost certainly see one the month following."

The coronavirus outbreak could also be a dampener on the housing market, he said, pointing to the possible damage to consumer confidence and the flow-on effects this can have to different industries.

Sydney has staged the fastest recovery of all the capital cities, but Mr Lawless said the growth was "slowing" with the city hitting an affordability ceiling.

Overall, regional house prices were up 1.7 per cent over the last 12 months compared to a 7.6 per cent rise in the capital cities.