On August 19, 1930, the two sides of Sydney’s Harbour Bridge touched in the middle for the very first time. Construction had begun back in 1923, with giant piers built on the northern and southern sides of the harbour. 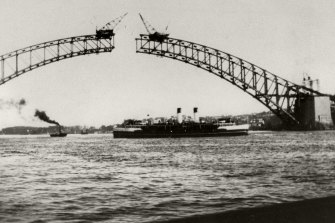 The Sydney Harbour Bridge under construction in 1930.Credit:

From late 1928, two giant “creeper cranes” on both sides of the harbour began extending the bridge's arches, inch by inch, until they met in the middle. After extensive load testing, the bridge was finally opened to traffic on March 19, 1932.

Australians, we are told, are today “building a bridge” to a post-COVID-19 economic recovery.

Only this time, it seems we’re striking out from the south shore, extending perilously into mid-harbour, while a vast fog obscures the distant shoreline. There is no alternative, but it's hardly ideal conditions for bridge building.

For the metaphor fans out there, we’re also told we’re sending our economy into “hibernation”. The impression being that it's only a matter of time before we emerge – cheeks unblemished by the ravages of time – to a sweet prince arousing us from slumber with true love’s first kiss.

But that metaphor doesn't quite work either. 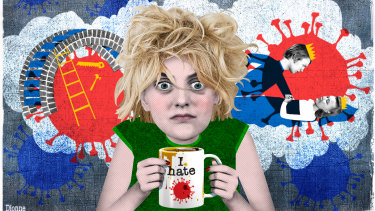 As time wears on, it’s increasingly apparent that the restrictive measures deployed to stop the spread of the coronavirus named SARS-CoV-2 – and limit any subsequent outbreaks – are likely to keep us in economic stasis for much longer than initially expected.

Far from an immediate “bounce back” or “snap back” to a pre-COVID-19 world, the rest of 2020, and perhaps beyond, is likely to herald an ongoing global process of trial and error, in which we restart parts of our economy, perhaps only to shut them down again if infections spike.

Of course, reading the economic tea leaves at such a time requires a double dose of humility. How things pan out will depend entirely on the epidemiology of a virus with which none of us are familiar.

But instead of a Sleeping Beauty-style period of hibernation, it seems increasingly likely 2020 will mean a restless night of sleep for the Australian economy, during which we may wake several times, check our phones and fall down an Instagram rabbit hole, before falling asleep again.

When we do wake, it’ll be in a foggy haze. We’re going to need coffee. And lots of it. (And by coffee, I mean government support, which I'll get to later).

This week the International Monetary Fund released its own attempts to forecast the direction of economies in the time of COVID-19. Headlines invariably went to its “baseline scenario” that the world economy will shrink this year before bouncing back next year.

On that rosy scenario, we’re still in for the biggest global downturn since the Great Depression.

But even the IMF doesn’t sound convinced that’s the worst of it.

It was at pains to point out its baseline scenario assumes “the pandemic fades in the second half of 2020 and containment efforts can be gradually unwound”.

But it stresses: “There is extreme uncertainty around the global growth forecast." Indeed: “Risks of a worse outcome predominate.”

In a small box towards the end of its report, the IMF models alternatives to its baseline, including a worst-case scenario in which containment measures stay in place for the whole of 2020 and are lifted in 2021 only to give way to a fresh outbreak of the virus.

On either scenario, governments better be on standby with more caffeine, the IMF concludes: “Fiscal measures will need to be scaled up if the stoppages to economic activity are persistent, or the pick-up in activity as restrictions are lifted is too weak.”

Even when the longed-for economic recovery is under way, there will be even more work for governments to do. Scaling back wage subsidies will be a “protracted” process, the IMF warns. But necessary, ultimately, to fund more appropriate measures such as “hiring subsidies”, to encourage firms to hire unemployed workers, or for worker retraining and job-matching programs.

The good news is that, so far, the Morrison government has taken a nimble and bold approach to policymaking, one that draws on the best advice of its bureaucracy.

Even before this crisis, senior bureaucrats were keen to stress to me that Scott Morrison is, contrary to disparagers, a pragmatic prime minister. He listens to advice, they said.

Get our Coronavirus Update newsletter for the day’s crucial developments at a glance, the numbers you need to know and what our readers are saying. Sign up to The Sydney Morning Herald’s newsletter here and The Age’s here.

He may be no Jacinda Ardern, but, unlike some of his predecessors and counterparts overseas, Morrison is also no hairy-chested ideologue, shackled by his own ego.

One can only imagine what extreme soul-searching it must have taken for a conservative prime minister politically wedded to delivering a surplus to throw it all out the window. But for Morrison and his government, the surplus imperative proved subordinate to another goal: protecting jobs. When it came to a choice between a surplus or the Coalition's mantra of "jobs and growth", Morrison chose the latter.

We’re about to see why, when official jobs figures are released on Thursday and in coming months. Thursday’s figures precede the televised queues outside Centrelink. But Treasury expects the official jobless rate to climb to 10 per cent by mid year. Without the JobSeeker payment, it would have been 15 per cent, on its figures.

In this time of mangled metaphors, it's clear that Morrison, while an inexperienced bridge builder, is at least no Sleeping Beauty.

Jessica Irvine is a regular columnist.