A report by KPMG Australia finds 25 per cent of more than 550 companies it sampled claim to have no material ESG or climate-related exposures, yet some peers in the same industries state they have vulnerabilities. 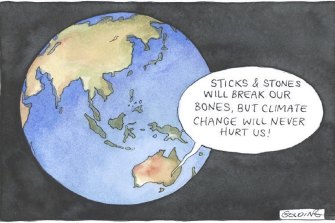 Reporting of these risks by ASX-listed companies remains voluntary, but many firms do so annually.

However, some are likely to have material exposure where there is a real possibility that these threats could substantially impact their ability to create or preserve shareholder value over the short, medium or longer term.

Bilyanska says while there are often differences in opinion about what is “material” and what is not, she is surprised that 25 per cent of the 550 companies sampled report there is “nothing to see here”.

‘All ASX-listed entities need to take a fresh look at their reporting.’

Some who state they have no risks have peers who identify climate threats, including biodiversity and water scarcity, or other things such as health-and-safety issues.

Explanations for the companies that state they have no risk include that their exposure is “immaterial”, or that they have a diverse portfolio of investments which shield them from risk.

Some companies stating they have no “material” risks do not provide reasons for their beliefs.

There is also a big variation between industry sectors in reporting ESG risks. For example, more than 70 per cent of the sample in the car and components sector state they have no risk, and 10 per cent of companies in the transport sector say they also have no such exposures.

It is not only investors who need to know about a companies’ ESG risks. Many customers want to buy goods and services from those with strong ESG credentials, or score well on their ability to benefit society, KPMG says.

Bilyanska says ESG reporting standards are being developed overseas that would likely be made mandatory in Australia – eventually. “So, all ASX-listed entities need to take a fresh look at their reporting,” she says.

A separate report by KPMG Australia, undertaken on behalf of the ASX, finds only a small rise in the number of listed companies disclosing diversity policies since the researcher last produced a similar report in 2015.

While just 10 per cent of companies sampled are yet to disclose a diversity policy, smaller firms remain laggards.

Overall, the number of women in senior executive roles is stagnant. However, there are some small wins for women: Their numbers on company boards have increased 10 per cent since 2015.

Another issue highlighted by the report is the small proportion of companies that disclose measurable objectives for representation of indigenous Australians, those with disabilities and those who are culturally, linguistically or gender diverse in their workplaces.