Furniture, like fashion, always has its moment in the sun. Some items from the 1970s through to the 1990s are now setting new benchmarks at auction houses around the world.

Furniture by designers such as Marc Newson, an Australian now based in Britain and represented by the prestigious Gargosian Galleries in London, can fetch eye-watering auction numbers. 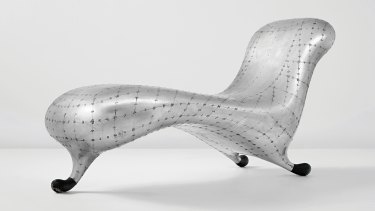 A limited-edition Marc Newson Lockheed Lounge, as seen the Madonna video for Rain.

In 2015, Madonna purchased Newson’s limited-edition metal Lockheed Lounge for more than £2.4 million ($4.6 million), after "trying it out" in her video hit Rain.

"Newson has carved out an important niche in the market, whether it’s for his chairs, stools, side tables or even his furniture made under license,” says Andrew Shapiro, director of Shapiro Auctioneers in Sydney. 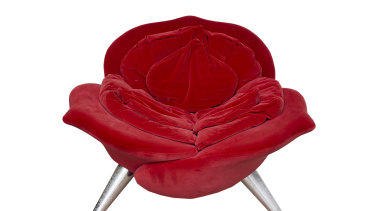 Others, such as Japanese designer Masonori Umeda’s Rose Chair, circa 1990, together with his Lily Chair from the same collection, continue to increase in value.

“The Umeda chairs were selling for about $2000 when they were released. Now they’re selling for $3000 and sometimes more,” says Shapiro.

Given the fragility of the chairs, with their layers of padded velvet "petals", finding one in great condition is sometimes problematic.

Other names, such as Andre Dubreuil, may not be as familiar but, according to Shapiro, the designer’s "overblown" furniture is now eagerly sought out by those "in the know."

Shapiro Auctioneers first started selling Dubreuil’s work when it came onto the market via the Mount Collection in October, 2010. The designer's Ram Chair graced the patio at Boomerang, a mansion in Sydney's prestigious Elizabeth Bay.

Mark Brazier-Jones is also put forward by Shapiro as a designer to seek out, including his Octopus coffee table from 1997 and his most iconic design, the San Demas lounge, circa 1992.

The baroque-like chairs are labelled by Shapiro as "high baroque," or "Hollywood Revival".

“His furniture was initially sold in a store in Sydney’s Strand Arcade. But like many avant-garde pieces, they never found a buyer,” Shapiro says.

“There’s considerable interest in Ettore Sottsass and Memphis movement furniture and objects from the early 1980s through to the end of 1990s. All these pieces are bespoke and have not been copied. They’re more like sculptures." 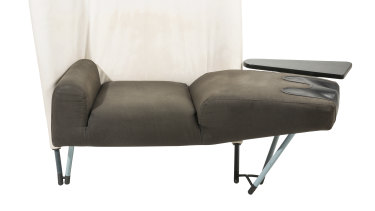 Anna Grassham, head of modern design at auction house Leonard Joel, in Melbourne, has also seen renewed interested in furniture from the 1970s through to the late 1980s.

Paolo Deganello’s Torso Chair, produced by Cassina in 1982, recently fetched $4600, according to Grassham.

She says the client bought in the chair with a slight tear in the backrest. “I advised the vendor to leave it the way it was,” she says.

Other standout pieces from the 1980s include Ettore Sottsass’ Carlton bookcase from the Memphis Milano collection of 1981. This is included in the Leonard Joel modern design auction on April 6.

"The brutalist style, including the furniture and materials that went with it, are very strong at the moment. We just can’t sell enough marble coffee tables.”