Home » Economy » Is Australia’s economy getting fatter? Surplus may not be a good thing

If you’re like many readers, you think economists and business people are obsessed with gross domestic product and dollars, dollars, dollars. So, as a never-to-be-repeated offer, today I’m going to write not about what Australia’s production of goods and services is worth, but what it weighs. 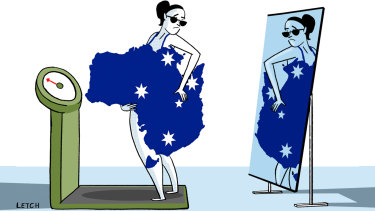 Well, that’s nice to know. But who in their right mind would bother working out all that? What does it prove? More than you may think – especially if you worry about the impact all our economic activity is having on the natural environment.

You’ve heard, I’m sure, about our big and growing “material footprint” caused by our production and consumption of raw materials. It, too, is measured by weight. The United Nations Environment Program International Resource Panel publishes estimates of the footprints of 150 countries, with the Australian figures coming from the CSIRO and industrial ecologists at the universities of Sydney and NSW.

In measuring a country’s footprint, they take account of four kinds of raw materials: biomass (from grass to timber), metals, construction materials and fossil fuels. It turns out, for instance, that the footprint of a kilo of beef is 46 kilos.

The UN takes a great interest in countries’ material footprint because one of its sustainable development goals is to decouple economic growth from environmental degradation. Ecologists worry that, particularly as poor countries lift their living standards up towards those the rich countries have long enjoyed, the pressure on the natural environment will be . . . well, unsustainable.

But whereas the ecologists’ figures show all countries’ material footprints getting bigger, a lot of economists argue that as economic growth and advances in technology continue, the economy is “dematerialising” – getting lighter.

This is because most of the growth in GDP has come from more provision of services rather than more production of goods through farming, mining and manufacturing. Human labour has no weight, even though it may involve more use of electricity and fuel.

But also because the physical weight of many goods is falling. Leigh reminds us that houses and vehicles are built from lighter materials. Domestic appliances are more compact. Transport networks are more energy-efficient. Software makes it possible to upgrade devices – from games to cars – that might previously have required new physical parts or total replacement.

These shifts led Alan Greenspan, former chairman of the US Federal Reserve, to claim in 2014 that “the considerable increase in the economic wellbeing of most advanced nations in recent decades has come about without much change in the bulk or weight of their gross domestic product”. Without question, he argued, the economy “has gotten lighter”.

So the point of Leigh’s calculations is to check who’s right: those economists claiming the economy is dematerialising, or the ecologists calculating that our material footprint is getting heavier.

Now, you could argue that Australia’s huge “natural endowment” of minerals and energy makes us quite unrepresentative of the advanced economies. Our mining industry has been booming, on and off, since the late 1960s. All you need to know is that our production of (heavy) iron ore – most of it for export – has risen ninefold since 1990.

But Leigh believes all the rich economies have expanding material footprints. The goods they consume may have been getting lighter per piece, but they’ve gone on consuming a lot more of them. Planes may be more fuel-efficient, but far more people are flying far more often (when we’re allowed). Clothes may be lighter, but we buy more of them. Food packaging may be thinner – I can remember when fruit and veg arrived at the greengrocers in wooden boxes – but we’re eating more takeaway meals.

Leigh concludes that, like the paperless office, the weightless economy remains surprisingly elusive. Which doesn’t change the need for us to put the economy on an ecological diet.

Our Morning Edition newsletter is a curated guide to the most important and interesting stories, analysis and insights. Sign up to The Sydney Morning Herald’s newsletter here, The Age’s here, Brisbane Times’ here, and WAtoday’s here.

Where are all of the jobs? These sectors hired the most in February