The energy market rulemaker has angered some of Australia's biggest wind and solar farm owners after rejecting their plea to reset how it prices network charges in areas with weak transmission links to the grid.

But there are hopeful signs new solar and wind projects are being built closer to the grid rather than in remote areas with weak connectivity to the network, meaning less energy is lost keeping the grid stable.

Investors and developers of renewable energy projects have been seeking an overhaul of charges related to transmission losses to spread them more evenly across the generation sector, instead of on plants connected into areas of bottlenecks and weak points of the grid. 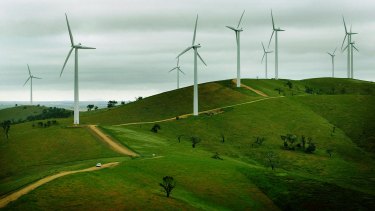 Investors warn wind and solar projects are at risk without urgent changes to transmission pricing.Credit:John Woudstra

But the Australian Energy Market Commission on Thursday said there was no need to create new rules to help accommodate the influx of renewable generation in the grid.

The current rules address the issue of electricity being lost as heat when it moves through transmission wires. The further it travels, and the strength of the links in transmission lines, affects the amount of lost electricity throughout the network. To determine and recoup the amount of lost power from a generators' input, the AEMC uses a "marginal loss factor" methodology.

Some renewable project developers had called for averaged-out loss factors to replace the current methodology of applying losses based on the circumstances of individual generators.

But commission chairman John Pierce said the current methodology created a price signal to encourage generators to build in better-connected areas to the grid.

"For the market to operate effectively, prices and economic signals need to reflect the physics of what’s happening in the [energy grid]," he said.

"Consumers shouldn’t have the cost of individual business decisions simply transferred to them."

Wind and solar investors representing six gigawatts of current projects and a pipeline of 11 gigawatts hit out at the decision, warning it will continue the slowdown in renewable energy investment and lead to higher prices for consumers.

A coalition of 25 investors including Macquarie Group, BlackRock, John Laing and Pacific Hydro, the Clean Energy Investors Group said marginal loss factors had stunted a pipeline of investment in new generation just as it is most needed to replace retiring coal-fired power stations.

Former Pacific Hydro chief Rob Grant said the AEMC had failed to provide a detailed analysis to justify its decision to keep the existing method of calculating the losses.

"We are very disappointed with the result … we still encourage AEMC to properly conduct the quantitative analysis to justify this decision," he said.

"They do agree with us that the volatility of marginal loss factors is causing costs of capital to increase … and that will therefore increase the cost of energy to consumers. It's a bit hard to understand the rationale."

The transformation of the electricity market to more cleaner sources of energy and more dispersed generation was unavoidable, he said, urging authorities to do  "everything in their power to deliver that transformation at the lowest cost to consumers.

"That happens by creating certainty for investors, and marginal loss factors are a very significant deterrent," Mr Grant said.

"Our prediction is now the supply of new projects and investment will continue to slow down as it has in the last six to nine months."

Kane Thorton of the Clean Energy Council, an industry group , said the marginal loss factor regime was "no longer fit for purpose", and the lack of confidence had seen new investment in large-scale renewable energy collapse by half in the past year.

"While the industry welcomes debate and analysis of alternative reforms, simply retaining the current regime is deeply problematic."

Mr Thorton said the AEMC undertook very little of its own analysis on the proposed options, and the decision to maintain the regime "misses an opportunity" to support the market's transition to cleaner forms of energy generation.

A Clean Energy Regulator report released on Wednesday said there were hopeful signs of the market maturing, with "evidence of the market finding some workarounds" and new solar and wind projects built in less remote areas with reduced energy generation potential but stronger connectivity to the network.

It said its figures showed renewable investment had "not collapsed as some have claimed" and more "can be unlocked if the necessary grid work can be progressed quickly".