Yang Li Hu, a 12-year-old Chinese oil tanker with a bright blue and red hull, was laden with oil as it set sail from the port of Kozmino on Russia’s southeastern tip.

The journey, which began on May 17, was headed towards Gwangyang, in South Korea. 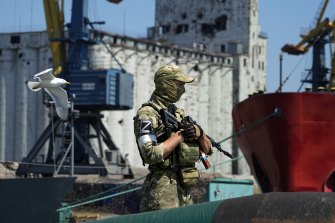 While Russian export levels are little changed, the make-up of companies handling the oil has.Credit:AP

Outside Kozmino, however, it was joined by a much larger vessel, Yuan Qiu Hu. Floating alongside one another, the pair underwent a ship-to-ship transfer – an operation experts say can be used to obfuscate the seaborne movement of goods.

With the job done, Yuan Qiu Hu sailed off to Lanshan, China, while Yang Li Hu headed back to Kozmino.

It was hardly a subtle move: the transfer was easily picked up by marine analysts, for whom it was straight out of a familiar playbook.

In the wake of Russia’s invasion of Ukraine, companies handling Moscow’s oil have done their best to stay under the radar, if they haven’t disassociated themselves.

Many feared the threat of sanctions – or being seen – as inadvertently aiding the Kremlin’s war.

There are a number of methods. One of the most popular is to “go dark”, switching off a vessel’s automatic identification system so its position is no longer broadcast. Such “dark activity” has tripled across Russia-affiliated oil tankers since the start of the conflict, according to consultancy Windward.

Illicit ship-to-ship transfers are another common trick. While cargo transfers are logged at ports, there is no such jurisdiction at sea, meaning it’s easy to hide where a vessel acquired its goods.

Meanwhile, there has been a concerted effort by some Russian operators to get ships off their books – transferring them to alternative owners in a way that may help them avoid future sanctions. Since the invasion started, some 180 vessels have changed from a Russian to non-Russian owner – a far faster rate than in previous years.

“It’s a moral issue. For Europe, it’s very hard to swallow that we are giving money to Russia every day, and they can continue to bombard and destroy.”

It has been a boom time for many European shippers. As international firms such as Shell moved to wipe their hands of Russian oil, a slew of Mediterranean operators stepped in to fill the gap. While Russian export levels are little changed, the make-up of companies handling the oil has.

The volume of fuel collected from Russian ports by vessels owned, managed or flagged in Greece, Cyprus or Malta has tripled since the start of the conflict according to Refinitiv data analysed by Global Witness, a human rights NGO.

“If that’s not profiteering, I’m not quite sure what is,” says Louis Wilson from Global Witness.

“Right now the fear is pretty low, and the greed is pretty high,” adds Ami Daniel, chief executive at Windward. 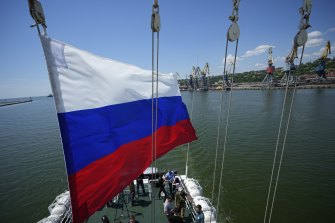 In the wake of Russia’s invasion of Ukraine, companies handling Moscow’s oil have done their best to stay under the radar,Credit:AP

But time may be running out. Last week the European Union said it would ban seaborne Russian oil imports, which represent more than two thirds of all deliveries of Putin’s crude to the bloc, by the end of the year. Greece, Malta and Cyprus pushed back against the move.

It is a difficult step for a Continent so dependent on Russian energy, but one that has seemed increasingly inevitable as the conflict dragged on.

“It’s a moral issue,” says Bjarne Schieldrop, a commodities analyst at Swedish bank SEB. “For Europe, it’s very hard to swallow that we are giving money to Russia every day, and they can continue to bombard and destroy.”

The decision will prompt a historic shift in the structure of global markets, breaking a relationship that has long underpinned the economies of both sides. Before the invasion of Ukraine, about 60 per cent of all Europe’s diesel was coming from Russia.

It may have been Britain that added the crucial ingredient to the latest round of sanctions, as it vowed to ban Russia-affiliated vessels from Lloyd’s of London, the insurance market.

Around 90 per cent of global shipping insurance is provided by the so-called International Group of P&I [protection and indemnity] Clubs, many of which are based in Europe. There’s also a complicated but crucial reinsurance market centred around Lloyd’s. Analysts in the trading and shipping sector say the ban will drive up costs for companies moving Russian oil, who will be forced into the hands of smaller, less established players and banned from some ports as a result.

There is likely to be stratification as a result, with the emergence of a distinct fleet of vessels whose controllers are either Russian, or have made peace with running fuel for Putin.

“In effect, you’re getting a two-tiered market created: those who will do business with Russia and those who won’t,” says Daniel.

While shipping Russian oil isn’t currently illegal, that hasn’t stopped traders getting ready for a shift.

Michelle Wiese Bockmann, an analyst at maritime intelligence group Lloyd’s List, says the beginnings of a shadowy fleet that may end up moving Russia crude is becoming apparent.

She has identified a slew of Cameroon-flagged vessels previously tracked moving Iranian or Venezuelan crude, which have recently shifted to conduct operations at Russian ports on the Black Sea or Baltic.

These vessels are part of a black fleet – which also operates under the flags of countries with shipping jurisdiction such as Gabon or Belize – that serves about 2 per cent of the global seaborne market by moving sanctioned oil on behalf of Caracas, Tehran and Pyongyang. Little is known about how they are insured, and most cannot dock at regular ports. 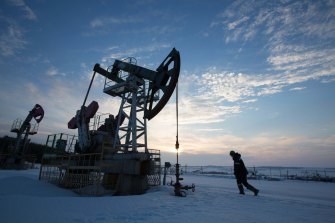 Russia is keeping the revenue flowing with its oil exports, but the walls are closing in. Credit:Bloomberg

It’s a tempting model for Russia as its seaborne oil trade prepares for pariah status.

“There’s a template there for the Russians to use that has been developed in response to prior sanctions on oil shipping,” says Bockmann.

But it won’t be simple for Moscow. “[Russia is] quite an order of magnitude bigger than Venezuela and Iran,” says Erik Broekhuizen, a consultant at Poten & Partners.

He estimates Russia will need to build a new fleet of more than 70 vessels if it wants to maintain output, adding: “Finding these vessels and arranging insurance for them outside the EU and UK markets could be very challenging.”

Until then, Russia may have little choice but to curb production.

That doesn’t mean the ban will be a clean-cut win for Brussels, however. Planned regulations risk flopping if they overwhelm shipping companies increasingly tangled in a web of international sanctions.

A schism will also have big potential consequences for the global economy.

Analysts at Morgan Stanley say Europe’s move to wean itself off Russian diesel has the potential to leave global markets “tighter for longer”. The Wall Street bank says crude oil flows from Russia into north-west Europe are already down around a million barrels a day for pre-invasion levels.

Once contracts wind up and the EU’s embargo on Russian fuel kicks in, Europe will need to find new sources of oil, which won’t be easy given political pressures.

Saudi Arabia, the US and Brazil are all likely sources, but Europe is unlikely to find any silver bullet.

“No one region is going to be able to step in and do this,” says Tim Smith, oil and tanker director at Maritime Strategies International.

Widespread qualms over buying oil from the Kremlin have forced its top producers to reduce prices. Urals crude, a benchmark for the country’s oil, has been trading at a discount of around $US30 a barrel to Brent crude through most of the war.

This deep discounting hasn’t gone unnoticed by other buyers. India has taken advantage of bargain-price barrels, with its imports soaring to nearly a million barrels a day in recent weeks. This has gone a long way to offsetting the drop in demand from Europe, meaning total Russia oil exports are fairly unchanged on pre-war levels.

Still, India’s refineries are already at full capacity, and it has long-term contracts with other suppliers including the Saudis, UAE and Iraqis that it may be loath to renege upon.

Chinese companies have also been exploring purchases, although the country’s oil importers haven’t visibly gone on a spending spree as of yet. Warren Patterson, head of commodities strategy at ING, says that may change as China emerges from lockdowns. Beyond those, Russia’s options may be more limited, but the world is too reliant on Moscow’s oil to leave the country completely in the cold – and as long as there’s a saving to be made, Putin is bound to find buyers.

“If the world stopped consuming [Russian oil], it would blow up,” says SEB’s Schieldrop. “Everyone knows that.”