Home » Economy » Inflation: bad for your budget, good for the government’s

A big part of the Morrison government’s pitch about being better at economic management than Labor is its claim to have ensured all the massive increase in unfunded government spending during the years of pandemic lockdowns was “targeted and temporary”. Well, not really.

In a paper written by Matt Saunders and Dr Richard Denniss, of the Australia Institute, they study the forecasts and projections out to 2025-26 in the latest budget, which those with long memories will remember was presented at the start of this seemingly endless election campaign. 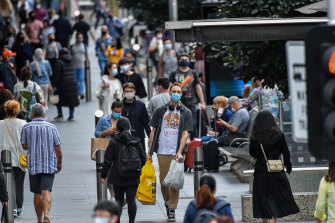 Recent developments are not good news for your budget, but they are great news for the government’s budget.Credit:Joe Armao

The authors find that, relative to what was projected in the last budget before the pandemic, annual government spending is now projected to grow at a much higher rate. It’s true annual spending has fallen back from its peak in 2020-21, but not by nearly as much as it should have if all the extra spending had been “targeted and temporary”.

So, what’s happened? I think I know. All the spending programs specifically labelled as part of the effort to hold the economy together during the lockdowns – JobKeeper, the JobSeeker supplement and all the rest – have indeed been wound up as promised.

But last year’s budget and this year’s both contained new spending initiatives that were separate to the explicitly pandemic-related measures. These, like most spending measures, were ongoing. Their annual cost tends to rise over time, in line with inflation and population growth.

If you remember, last year’s budget included much additional spending on aged care in response to the shocking findings of the royal commission, extra spending on the National Disability Insurance Scheme and a big increase in childcare subsidies.

Another thing worth remembering about last year’s budget: whatever the obvious political motivation for that additional spending, the econocrats co-opted it for their Plan B: if after almost a decade trying you can’t get wages to return to their normal healthy growth, why not try getting unemployment down so low that employers have to bid up wages to get or retain the labour they need?

Your personal budget benefits only indirectly, if all at, from our booming exports. But it will bear the full effect of higher import prices.

With under acknowledged help from the temporary closure of our borders to all imported labour, Plan B has worked so well it’s now adding to the risk of ongoing inflation arising from all the once-off imported inflation.

But perhaps the most startling thing revealed by the authors’ examination of the budget papers is the way, relative to the pre-pandemic figures, nominal gross domestic product is now projected to grow at quite a faster rate than real GDP.

Why would nominal grow faster than real? Clearly, because of a higher rate of inflation. Remember, however, here we’re talking about inflation measured not as usual by the consumer price index, but as measured by the “GDP deflator”.

Why would the two measures give significantly different results? Because our “terms of trade” had changed. If the prices we receive for our exports are changing at a different rate from the prices we’re paying for our imports.

We’ve been making so much fuss about the bad news of rising import prices, such as petrol and diesel, we’ve forgotten that, as a big exporter of energy and food, we’re a net beneficiary of the Ukraine war’s effect on world commodity prices.

With much additional help from high iron ore prices, our terms of trade improved by more than 12 per cent in the March quarter, to a record high. A record high, and no one noticed.

But here’s the trick: your personal budget benefits only indirectly, if all at, from our booming exports. But it will bear the full effect of higher import prices, which do most to explain why the cost of living is up 5 per cent in a year and headed higher.

The Reserve Bank is confident this year’s round of wage rises will a fair bit higher than last year’s, but it is adding to home-buyers’ cost of living by putting up interest rates, to help ensure wages rise by a lot less than prices in the period ahead.

So, recent developments not good news for your budget, but great news for the government’s budget. Its revenue tends to grow in line with the growth in nominal GDP. And higher inflation means higher taxes.

Mining companies paying more company tax, consumers paying more goods and services tax and, even despite the continuing fall in real wages, higher income tax collections as whatever wage rise workers do get pushes them into higher tax brackets or otherwise raises their average tax rate. Good news for some.

Ross Gittins is the economics editor.