BlackRock chief executive officer Larry Fink told global leaders the World Bank and International Monetary Fund are outdated and require a total overhaul if they’re to marshall the trillions of dollars in investment needed to bring sustainability to the developing world.

Specifically, he called for a “rethink” of their role as financiers – instead of lending money themselves to promote development and economic stability, the World Bank and IMF would be more useful in the transition to clean energy as insurers that reduce risk for private investors. Fink commented in prepared remarks to the Venice International Conference on Climate, part of the weekend meetings of the Group of 20 in Italy. 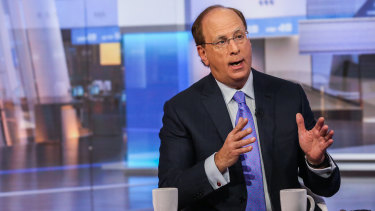 “There is private capital that can be mobilised for the emerging markets, but we need to rethink the way the international financial institutions can support low-carbon investments at scale,” he said of the two organisations established 77 years ago in the waning days of World War II. “We need a financing system that isn’t built around bank balance sheets.”

A representative from the IMF declined to comment and the World Bank didn’t immediately respond to a request for comment.

Fink, arguably the world’s most powerful investor with about $US9 trillion ($12 trillion) under management at New York-based BlackRock, used his speech largely to highlight what he considers flaws or risks in the approaches many countries are taking to reach net-zero emissions. He flagged the unintended consequences of climate-related regulation on public companies and the potential for “politically untenable” $US100-a-barrel oil if fossil fuel demand doesn’t slow fast enough.

BlackRock has made a big bet on sustainable investing in the past two years and stands to benefit as more capital flows to environment-friendly solutions.

The financing challenge, as Fink sees it, is creating “long-term, durable returns” in developing economies for private investors who shudder at the prospect of steep losses or wild volatility. His solution, using a crisis-fighting tool developed by the US Treasury as a model, is turning the World Bank and/or IMF into “first-loss” guarantors.

In 2009, with the world reeling from the near-collapse of the financial system, the Treasury lured investors to buy portfolios of toxic assets by offering them insurance against initial losses. As the economy recovered, the participants in the Public-Private Investment Program made money and the government reaped $US3.9 billion in interest on its $US18.6 billion.

“We need global solutions and international organisations that are willing to mitigate the risks of investing in emerging markets,” Fink said in his speech. “We need more solutions like those used in mortgage-backed securities where some degree of losses is absorbed before they impact private investors.”

There is precedent for similar arrangements. In 2015, the World Bank’s International Development Association provided a policy-based guarantee, or PBG, insuring 40 per cent of a $US1 billion bond issue by Ghana. As a result, the debt received a higher credit rating, and Ghana was able to extend its maturity and lower the interest rate. Other PBG recipients under the same framework include Albania, Angola and Pakistan.

“We need a financing system that isn’t built around bank balance sheets.”

BlackRock also built a similar guarantee feature into the Climate Finance Partnership it formed with France, Germany and Japan and two philanthropies. That effort has raised more than $US250 million so far to invest in carbon reduction in emerging markets.

“As excited as I am about this partnership, we need solutions of a much greater magnitude,” Fink said in Venice.

According to the International Energy Agency, clean-energy investment in emerging markets has to reach at least $US1 trillion a year by 2030, up from $US150 million a year today, for the world to reach a mid-century target of net-zero emissions. 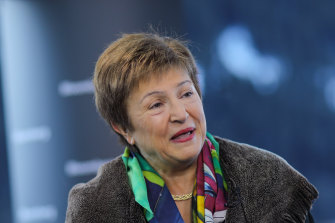 Both the World Bank and the IMF were founded in 1944 at the so-called Bretton Woods Conference that created the postwar monetary system. Banks, once a major source of funding for sovereign borrowers in emerging markets, have cut risky lending since the 2008 financial crisis. Much of that credit capacity now lies in the hands of asset managers such as BlackRock and Pacific Investment Management Co.

While Fink has shared his first-loss concept with G20 leaders including French President Emmanuel Macron and Italian Prime Minister Mario Draghi, according to people familiar with those discussions, some stakeholders may be less receptive. World Bank President David Malpass has lambasted the private sector for not doing its “fair share” in providing debt relief to poor countries and curtailed the use of PBGs since taking his position in 2019.

Often, the interests of public financiers and private creditors are at odds. One group has a mandate to assist nations in need, the other a fiduciary duty to get repaid.

BlackRock is among creditors that felt burned when Argentina, operating under an IMF bailout program, defaulted on its foreign debt in early 2020 and eventually restructured its obligations at 55 cents on the dollar. Fink, speaking last November, said it would take a “lot of time” for the private sector to be comfortable investing in Argentina again.

In his Venice speech, Fink also told leaders investors need a more consistent set of rules on climate-related disclosures and warned that the regulatory focus on publicly traded companies may have unintended consequences.

“One negative effect it’s having is creating a massive incentive for public companies to divest dirty assets,” he said. “Divesting, whether done independently or mandated by a court, might move an individual company closer to net zero, but it does nothing to move the world closer to net zero.”

Royal Dutch Shell, the oil and gas giant, was ordered by a Dutch court in May to slash its carbon emissions harder and faster than planned. The company, which was already selling assets, is now considering more dispositions.

At the same time, there’s been little progress on reducing fossil-fuel consumption beyond electric vehicles. In most industries, the “green premium,” or cost of a sustainable alternative to hydrocarbons, remains too high. Fink raised the possibility that rising demand and shrinking supply may drive oil prices to $US100 or even $US120 a barrel.

“While some see higher prices as a way to constrain demand, rising costs in the energy sector will only sow greater economic inequality and a world of ‘haves and have-nots,’” he said.

CVS, Walgreen results get a boost from vaccinations and COVID-19 tests