Over the past week, I’ve been involved in a project tracking petrol prices around the country to monitor how retailers respond to the federal budget’s 22 cents-per-litre cut to the fuel excise.

Each day, we’ve pored over the data to see which stations are passing on the full cut and by how much – and which ones aren’t.

But still, a week on, there are hundreds that have not – and they’re fast running out of excuses. 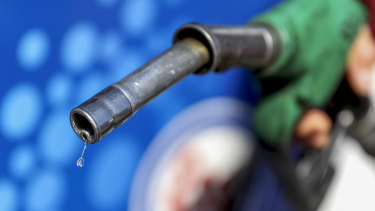 Petrol stations that haven’t passed on the cut to the fuel excise are running out of excuses.Credit:Bloomberg

Federal Treasurer Josh Frydenberg said the price cut would flow through to the bowser “over the next two weeks” as stations sold off the fuel they’d already bought at the higher price.

But Mark McKenzie, chief executive of the ACAPMA (Australasian Convenience and Petroleum Marketers Association), said it should take between three and seven days, depending on location.

So, here we are at the eight-day mark. And it’s arguable that prices should have dropped by more than the 22 cents-a-litre cut by now.

That’s because the other factor operating in the background is the regular fuel price cycle, which was dropping on budget night in most states and due to bottom out around the start of this week.

The cycle is notoriously unpredictable and even more so since the war in Ukraine, but it’s safe to say that in the past week, at least in Sydney, Melbourne, Perth and Brisbane, consumers should have seen a 22 cent excise cut plus some extra relief – maybe about another 10 cents down in those states – thanks to the regular price cycle.

So, it’s not unreasonable to expect a 30 cents-a-litre drop since budget night – and that’s what hundreds of retailers have delivered.

As part of my role as campaign director at One Big Switch, I’ve been preparing a daily update since budget night with fuel discount club Ruckus Energy, which collects daily pricing data.

Our analysis of the first week showed that a handful of stations led the way in cutting prices, causing others to follow:

As of Monday this week, 1977 petrol stations had dropped their prices by 20 cents per litre, or better, and 374 stations had cut by 30 cents a litre or better since budget night.

The ACCC has been tasked with monitoring retailers and has said it will crack down on any laggards who don’t share the saving “as soon as possible”. But as consumers, we can reward those who do the right thing and punish those who don’t, thanks to mandatory fuel price reporting in most states.

In NSW, Queensland and WA, stations have to report their prices regularly, so we can use the range of fuel price apps to check who has passed on the cut and has the cheapest fuel.

Victoria lags other states, but app developers and websites such as RACV cobble together data from various sources to give motorists at least a basic picture of who’s cheapest.

So if you see a station this week that looks to be pocketing some or all of the excise cut, drive right by and don’t fill up there. Then report them to the ACCC.

Conversely, if you see a station that’s cut prices by over 30 cents a litre and is one of the cheapest around, pull in and fill up. They deserve your business.

Joel Gibson is the author of KILL BILLS! The 9 Insider Tricks you Need to Win the War on Household Bills. Catch his money-saving segments on Nine Radio, TODAY & Twitter @joelgibson.